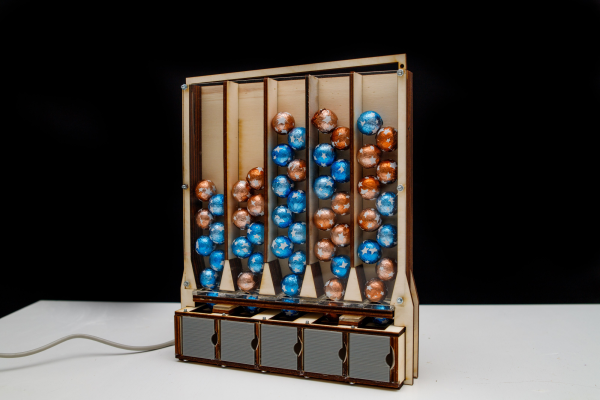 [John] sent this one in to us a little bit after Christmas, but we’ll give him a pass because it’s so beautiful. Think of it this way: now you have almost a full year to make a binary advent calendar of your own before December 1st rolls around again.

Normal advent calendars are pretty cool, especially when there is chocolate behind all 24 doors. But is it really a representational ramp-up if you never get more than one chocolate each day? [John] doesn’t think so. The economics of his binary advent calendar are a bit magical, much like the holiday season itself. Most days you’ll get two pieces of chocolate instead of one, and many days you’ll get three. That is, as long as you opened the right doors.

A momentary switch hidden behind the hinge of each door tells the Arduino clone when it’s been opened. The Arduino checks your binary counting abilities, and if you’re right, a servo moves a gate forward and dispenses one chocolate ball per opened door. We love the simplicity of the dispensing mechanism — the doors are designed with a ceiling that keeps non-qualifying chocolates in their channels until their flag comes up.

[John] is working out the kinks before he releases this into the wild. For now, you can get a taste in the demo video featuring a bite-sized explanation. If you don’t like chocolate, maybe this blinky advent calendar will light you up inside.