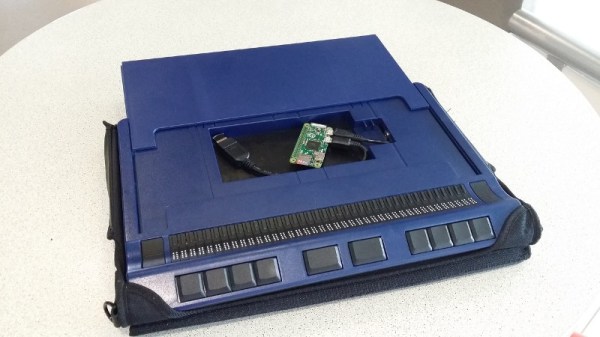 Our recent coverage of a Raspberry Pi Zero inside the official Pi keyboard prompted a reader to point us to another far more unusual keyboard with a Pi Zero inside it. It may be a couple of years old, but [Mario Lang]’s Braille keyboard and display with built-in Pi is still an interesting project and one that should give sighted readers who have not encountered a Braille display an introduction to the technology.

The model in question is a Handy Tech Active Star 40, which seems to have been designed to have a laptop sit on top of it. A laptop was not the limit of its capabilities, because it also has a compartment with a handy USB connector that was intended to take a smartphone and thus makes a perfect receptacle for a Pi Zero. Sadly the larger boards are a little tall with their connectors.

If this hack were preformed today he would undoubtedly have used a Pi Zero W, but since the Zero he had did not possess WiFi he relied upon a Bluetooth dongle for connectivity to the outside world. The BRLTTY screen reader provides a Braille interface to the Linux console, resulting in an all-in-one Braille computer in a very compact form factor.

This is one portable Braille computer, but it’s by no means the only one we’ve seen. Thanks [Simon Kainz] for the tip, and here’s a nod to the Pi keyboard that inspired him. 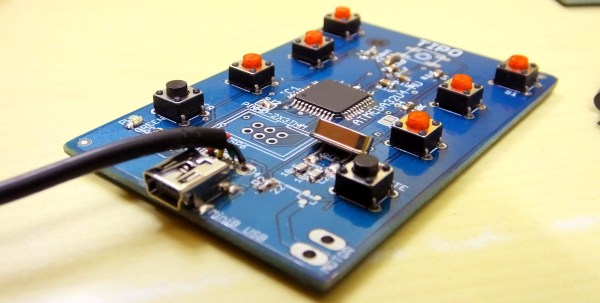 A few things stand out about [Vijay]’s braille keypad for smartphones. One is how ergonomic the plans for the final result are, sitting on the back of the smartphone such that you hold the phone much as you often normally would. Another is that it plugs in just like any other USB keyboard. And the last should make any vi user smile — you don’t have to move your fingers to type. You just press combinations of buttons already under your fingers.

It consists of a custom circuit board with an AtMega32U4, a 16 MHz oscillator, a Micro-USB connector and eight pushbutton switches.  The AtMega32U4 allows him to use the Arduino HID library. After mapping the braille button combinations to keys, the HID library sends the key values over a USB-OTG cable to the smartphone to be accepted as if they were coming from a normal plug and play keyboard.

We have to give kudos to [Vishay] for testing with blind people experienced with braille. For example, he’s learned that if the user presses [Dots 1 2] for ‘b’ followed by [Dots 1 4] for ‘c’, they prefer to not have to remove their finger from the 1 in between the two characters, for more rapid typing.  He also learned that battery management is problematic and that may be why he’s since abandoned the option of communicating over Bluetooth, leaving just USB, and thereby eliminating the need for a battery.

[Vijay]’s project is a finalist for the Internet of Useful Things Hackaday Prize and we’re eager to see what the final result will look like. But in the meantime, check out his hackaday.io and GitHub pages, and see the video below of one iteration of his keypad in use.

END_OF_DOCUMENT_TOKEN_TO_BE_REPLACED

As with all devices meant for a very small percentage of the population, computing equipment for the blind is very, very expensive. A Braille typewriter – a relatively simple machine that puts dots on a piece of paper – costs about $700 USD. Need a Braille interface for a computer? You can buy a 16-cell wide Braille output for $1600, and high-end models with an integrated keyboard go up to $5000.

For his Hackaday Prize entry, [Haydn Jones] is building a simpler and cheaper Braille computer. It’s not just a single line of text at a time; this computer will have a display that will output an entire page of Braille at a time.

The current solutions for a computer to Braille interface use small electromechanical cells for each character. That’s six individual pins for each character, multiplied by the number of cells on the display. Doing a full-page display with this type of mechanism, but [Haydn] has another idea. Instead of controlling each pin individually, all of the pins on the display will be controlled by a CNC-like mechanism. The pins themselves will be mechanical SR latches, better known as the mechanism in a ball point pen.

A display is only half of the IO of a computer, and for the input portion of his build, [Haydn] is also building a Braille keyboard. This doubles as a binary or hexadecimal keyboard, but the idea is very similar to a proper chorded Braille keyboard. It’s a simple enough build; just a few key switches and a microcontroller.