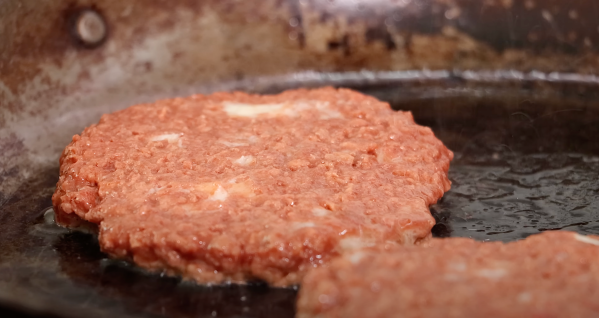 If you’re vegetarian or don’t eat beef, you are probably already familiar with Impossible. Impossible meat tastes like beef and cooks like beef while being plant-based. They achieved this with significant R&D and a few special patents. But if you don’t want to pay Impossible prices, [Sauce Stash] has been trying to recreate some of the tricks that Impossible uses. (Video, embedded below.)

[Sauce Stash] starts with the ingredients list and tries to reason what would be suitable substitutes. However, even following the ingredients list, adding iron is one crucial trick that takes your vegetarian beef much closer to tasting like proper beef. Impossible has a special patent process for creating leghemoglobin (or heme), the iron molecule we associate with red meat’s taste. It makes the meat seem to bleed as it cooks and dramatically changes the flavor. Impossible genetically engineered yeast to produce the compound to get heme on an industrial scale. But they state on their website that the molecule can be found in many plants, including soy. With a magnet and soy in hand, he tried to pull the iron out overnight but didn’t get anything substantial. Unfortunately, the heme is in the root of the soy plant, not in the milk, so it was back to the drawing board.

There are a few other sources: breakfast cereals, black olives (often treated with iron gluconate), and the roots of other legumes. However, [Sauce Stash] took a more leisurely route and crushed a soy-based iron tablet. However, being a supplement, there were other ingredients that he didn’t want in his burger. So he used the magnet to extract the iron to include. After that, it was easy sailing, and he was very proud of the vegan burger he had created.

Creating something that tastes and feels like something else is a complex and tricky endeavor, and hacks like these are always interesting to think about. We’d take texture pea protein over an insect burger, but perhaps that is just something we need to get over. Video after the break.

END_OF_DOCUMENT_TOKEN_TO_BE_REPLACED 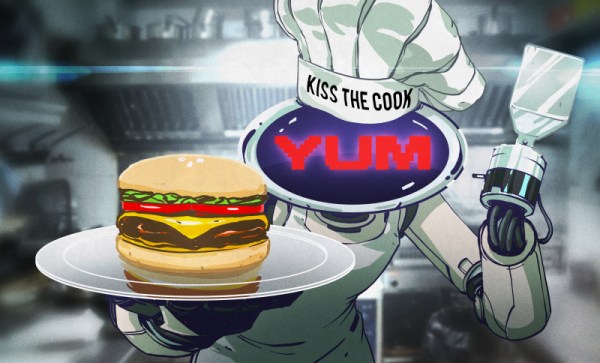 In the fast food industry, speed is everything. The concept has never just been about cooking quickly. Players in this competitive space spend huge fortunes every year on optimizing every aspect of the experience, from ordering, to queueing, to cleaning up afterwards. And while fast food restaurants are major employers worldwide, there’s always been a firm eye cast over the gains that automation has to offer.

In the West, fast food most commonly brings burgers to mind. Preparing a quality burger requires attention to the grade of meat, fat content, as well as the preparation steps before it hits the grill. Then it’s all about temperature and time, and getting just the right sear to bring out the natural flavors of the beef. While a boutique burger joint will employ a skilled worker to get things just right, that doesn’t fly for fast food. Every order needs to be preparable by whichever minimum-wage worker got the shift, and be as repeatable as possible across entire countries, or even the world, to meet customer expectations.

In their efforts to improve efficiency, White Castle have taken the bold step of installing a robotic burger flipper, imaginitively named Flippy. Built by Miso Robotics, the robot hangs from a ceiling rail to minimise the space taken up in the kitchen area. Based on a Fanuc robot arm, the system uses artificial intelligence to manage kitchen resources, Flippy is capable of managing both the grill and fryers together to ensure fries don’t get cold while the burgers are still cooking, for example. Currently undergoing a trial run in Chicago, White Castle has ambitions to roll the technology out to further stores if successful.

We’ve seen other robotic burger systems before, too. In late 2018, our own [Brian Benchoff] went down to check out Creator, which cooks and assembles its burgers entirely by machine. Despite suspicions about the business model, Creator have persisted until the present day with their unique blend of technology and culinary arts. Particularly impressive were their restaurant modifications in the face of COVID-19. The restaurant received an overhaul, with meals being robotically prepared directly in a take-out box with no human contact. Take-out meals are double-bagged and passed to customers through an airlock, with a positive-pressure system in the restaurant to protect staff from the outside world.

Pizza is a staple food for many, with high demand and a stronger dependence on delivery than other fast food options. This has led to the industry exploring many avenues for automation, from preparation to order fulfillment.

In terms of outright throughput, Zume were a startup that led the charge. Their system involves multiple robots to knead dough, apply sauce and place the pie in the oven. Due to the variable nature sizes and shapes of various toppings, these are still applied by humans in the loop. Capable of turning out 120 pizzas per hour, a single facility could compete with many traditional human-staffed pizza shops. They also experimented with kitchens-on-wheels that use predictive algorithms to stock out trucks that cook pizzas on the way to the customer’s door. Unfortunately, despite a one-time $4 billion USD valuation, the startup hit a rocky patch and is now focusing on packaging instead.

Picnic have gone further, claiming an output rate of up to 300 twelve-inch pies an hour. The startup aims to work with a variety of existing pizza restaurants, rather than striking out as their own brand. One hurdle to overcome is the delivery of a prepared pizza into the oven. There are many varieties and kinds of pizza oven used in commercial settings, and different loading techniques are required for each. This remains an active area of development for the company. The company has a strong focus on the emerging ghost kitchen model, where restaurants are built solely to fulfill online delivery orders, with no dining area.

Domino’s is one of the largest pizza companies in the world, and thus far have focused their efforts on autonomous delivery. The DRU, or Domino’s Robotic Unit, was launched to much fanfare, promising to deliver pizzas by a small wheeled robotic unit. Equipped with sensors to avoid obstacles and GPS navigation, the project has not entered mainstream service just yet. However, between this and the multitude of companies exploring drone delivery, expect to see this become more of a thing in coming years.

A more immediate innovation from Domino’s has been the DOM Pizza Checker. With customer complaints about pizza quality plaguing the chain, the pizza checker is an AI-powered visual system. It’s responsible for determining if the correct pizza has been made, with the right toppings and good distribution. An impressive practical use of AI imaging technology, it sounds an alarm if the pizza isn’t up to scratch, prompting it to be remade. However, it has come under scrutiny as a potential method to harass franchisees and workers. Additionally, the limitations of the system mean that Domino’s are still perfectly capable of turning out a bad pizza on occasion.

One of the most visible examples of fast food automation is the widespread adoption of order kiosks by McDonalds, which kicked off in earnest in 2015. The majority of stores in the US now rely on these to speed up the ordering process, while also enabling more customization for customers with less fuss. Over-the-counter ordering is still possible at most locations, but there’s a heavy emphasis on using the new system.

In general, online ordering and delivery has become the norm, where ten years ago, the idea of getting McDonalds delivered was considered magical and arcane. This writer made seven attempts to take advantage of an early version of the service in China in 2015, succeeding only once, largely due to a lack of understanding of addresses written in non-Latin characters. However, due to the now-ubiquitous nature of services like Ubereats, Postmates, and Menulog, it’s simple for any restaurant to largely automate their ordering and fulfillment process, and reach customers at a distance from their brick-and-mortar locations.

Other efforts are smaller in scope, but contribute to great efficiency gains back-of-house. McDonalds and other chains have widely adopted automated beverage systems. Capable of automatically dispensing cups and the requisite fluids, they take instructions directly from the digital ordering system and take the manual labor out of drink preparation. They’re also great at slightly underfilling the cups, in a way that any human would consider incredibly rude.

Robots in the fast-food kitchen stand to reduce or eliminate tedious, repetitive work. Robots don’t get sick, and less human labour means fewer rostering hassles. It seems to be a foregone conclusion that more automation is on the way, and while some startups may falter, others will surely succeed. Your next meal may just yet be entirely prepared by a robot, even if it’s still delivered by a tired grad student on a moped. Come what may!