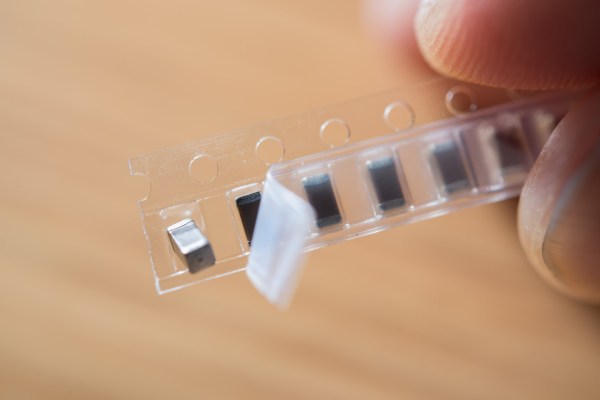 Even for the simplest of products, production at scale can be big challenge. For example, you might find yourself spending many hours manually counting and cutting strips of component tape to go with the DIY electronics kit your selling on Tindie. [Tom Keddie] found himself in similar position some time ago, and built himself an automated component counter and tape cutter.

[Tom] posted the video of his old machine (see it after the break) after a call for help from another Twitter user who found himself with a lot of component strips to cut. The frame of the machine is made from 20×20 aluminium extrusions and laser cut plexiglass. The tape is pulled off the reel by a stepper motor using a 3D printed sprocket, with the tape held on by Lego wheel and tension spring. A second idler sprocket with tensioner is used to guide the tape through two photo-interrupters that can count holes in opaque tape or the components in clear tape. The cutter itself it an Exacto blade mounted on a wooden block in a guillotine-like arrangement, driven by another stepper motor and a threaded rod as lead screw. Everything is of course controlled by an Arduino. Although not used any more, [Tom] says it worked very well in its day.

The availability of cheap laser cutting, 3D printing and components like aluminium extrusions and stepper motors have really made it possible for anyone to add some automation to production in the home workshop. You won’t be surprised that we’ve seen something like this before, but we’ve also seen similar machines for wiring prep and through-hole resistors. Let us hear your production hacks in the comments, or drop us a tip if you’ve documented it!

END_OF_DOCUMENT_TOKEN_TO_BE_REPLACED

If you have ever had to assemble a batch of electronic kits, you will know the tedious nature of cutting the tape containing your components. It’s easy enough to count four or five surface-mount resistors and snip them off with a pair of scissors once or twice, but when you are faced with repeating the task a hundred or more times, its allure begins to pale.

[Overflo] faced just such a problem when assembling hundreds of kits for a workshop at the upcoming 34C3 event in Germany. The solution? A tape-cutting robot, of course! (YouTube video, embedded below.)

At the heart of the machine is a pair of scissors operated by a stepper motor, snipping away at the component tape fed by another stepper. An infra-red light barrier sensor counts sprocket holes, and the whole is under the control of an Arduino Pro Mini. An especially clever trick is that the strip passes over a marker pen, allowing different components in a kit to be identified by a color code.

This isn’t the first such approach to this problem we’ve encountered, here’s one that cuts component tape with a laser.