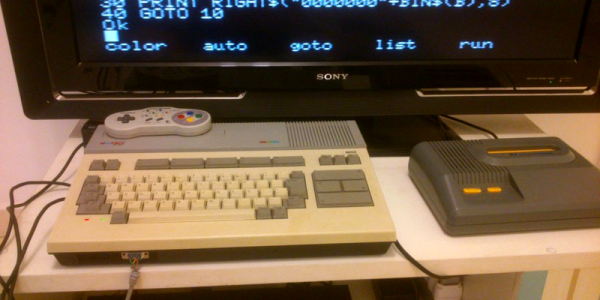 For those of us not old enough to remember, and also probably living in the States, there was a relatively obscure computer built by Microsoft in the early 80s that had the strong Commodore/Atari vibe of computers that were produced before PCs took over. It was known as the MSX and only saw limited release in the US, although was popular in Japan and elsewhere. If you happen to have one of these and you’d like to play some video games on it, though, there’s now a driver (of sorts) for SNES controllers.

While the usefulness of this hack for others may not help too many people, the simplicity of the project is elegant for such “ancient” technology. The project takes advantage of some quirks in BASIC for reading a touch-pad digitizer connected to the joystick port using the SPI protocol. This is similar enough to the protocol used by NES/SNES controllers that it’s about as plug-and-play as 80s and 90s hardware can get. From there, the old game pad can be used for anything that the MSX joystick could be used for.

We’ve seen a handful of projects involving the MSX, so while it’s not as popular as Apple or Commodore, it’s not entirely forgotten, either. In fact, this isn’t even the first time someone has retrofitted a newer gaming controller to an MSX: the Wii Nunchuck already works for these machines. 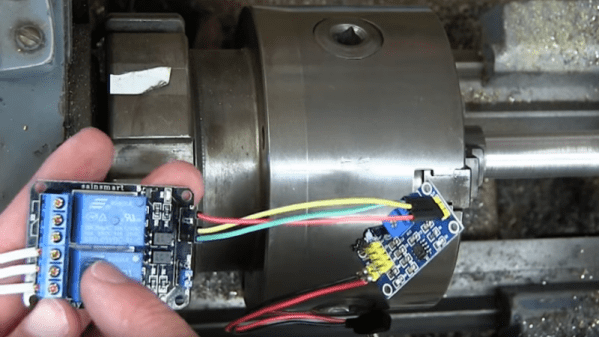 Vibration is a fact of life in almost every machining operation. Whether you’re milling, drilling, turning, or grinding, vibration can result in chatter that can ruin a part. Fighting chatter has generally been a matter of adding more mass to the machine, but if you’re clever about things, chatter reduction can be accomplished electronically, too. (YouTube, embedded below.)

When you know a little something about resonance, machine vibration and chatter start to make sense. [AvE] spends quite a bit of time explaining and demonstrating resonance in the video — fair warning about his usual salty shop language. His goal with the demo is to show that chatter comes from continued excitation of a flexible beam, which in this case is a piece of stock in the lathe chuck with no tailstock support. The idea is that by rapidly varying the speed of the lathe slightly, the system never spends very long at the resonant frequency. His method relies on a variable-frequency drive (VFD) with programmable IO pins. A simple 555 timer board drives a relay to toggle the IO pins on and off, cycling the VFD up and down by a couple of hertz. The resulting 100 RPM change in spindle speed as the timer cycles reduces the amount of time spent at the resonant frequency. The results don’t look too bad — not perfect, but a definite improvement.

It’s an interesting technique to keep in mind, and a big step up from the usual technique of more mass.

END_OF_DOCUMENT_TOKEN_TO_BE_REPLACED

If you have ever had to assemble a batch of electronic kits, you will know the tedious nature of cutting the tape containing your components. It’s easy enough to count four or five surface-mount resistors and snip them off with a pair of scissors once or twice, but when you are faced with repeating the task a hundred or more times, its allure begins to pale.

[Overflo] faced just such a problem when assembling hundreds of kits for a workshop at the upcoming 34C3 event in Germany. The solution? A tape-cutting robot, of course! (YouTube video, embedded below.)

At the heart of the machine is a pair of scissors operated by a stepper motor, snipping away at the component tape fed by another stepper. An infra-red light barrier sensor counts sprocket holes, and the whole is under the control of an Arduino Pro Mini. An especially clever trick is that the strip passes over a marker pen, allowing different components in a kit to be identified by a color code.

This isn’t the first such approach to this problem we’ve encountered, here’s one that cuts component tape with a laser.

END_OF_DOCUMENT_TOKEN_TO_BE_REPLACED 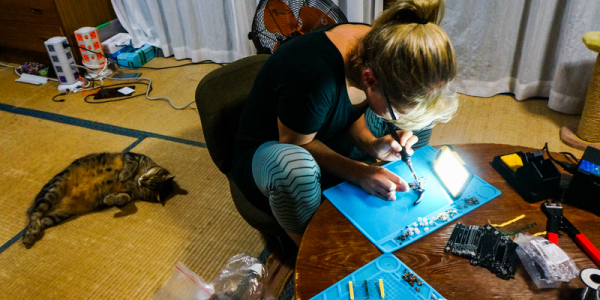 Puerto Rico has a long road to recovery, and part of this is the damaged infrastructure: much of the electricity distribution network was destroyed, and will take months or years to rebuild. The Japanese hacker group [Hackerfarm], founded by Hackaday friend [Akiba], is looking to help by sending some of their solar lanterns to provide off-grid light.

They’ve already shipped one batch, and are using the proceeds from sales of these paper lanterns to send more of them to Puerto Rico, where they will be given out to those who need them. The group has carried out similar projects before, distributing lanterns to Tsunami-hit areas of Japan and to Rwanda, where a women’s group builds and sells the lanterns. It seems like a great cause, and the design of the lanterns is pretty neat. We love that they provide an introduction to soldering and serve a higher purpose at the same time.

We’ve mentioned Hackerfarm before, both as part of a growing rural hackerspace scene, and because of their insane EL-wire creations and choreography. And [Akiba] gave a great talk at last year’s Supercon where he discussed the ins and outs of getting virtually anything done in Shenzhen. Check it out if you haven’t already. 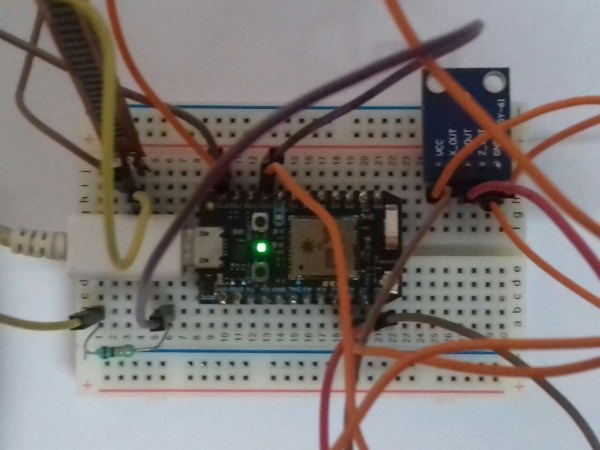 When it comes to high-tech bionic legs for amputees, all the cool stuff is titanium, carbon fiber or other, more exotic materials. With carbon fiber “blades” all the rage, it’s easy to forget that simpler technologies still work, and could be made to work even better with the addition of some inexpensive electronics. The Economical Bionic Leg project is the result of that idea.

Project creators [PremJ20] and [G.Vignesh] aren’t kidding about bringing the cost of these bionic legs down. The target goal is $60 per, with stainless steel and silicon rubber as a cheaper alternative to carbon fiber — the rubber would be molded to fit the amputated region. The heart of the project is a Particle Photon development board, with a flex sensor and accelerometer monitoring the prosthesis and supplying data to the cloud. It’s essentially a basic prosthetic leg with a monitoring system built in. Placing a sensor cuff on the regular leg, the artificial limb’s flexibility can be fine-tuned to match the two.

Will this inexpensive bionic leg ever compete in the Olympics, like [Oscar Pistorious] run in the 2012 London event? Probably not — the tech that goes into artificial limbs has the same amount of material science going into it as F1 racing and turbojet design. Still, this is a very cheap way to bring tech into something that desperately needs to be cheaper, and it’s a great Hackaday Prize entry, to boot. 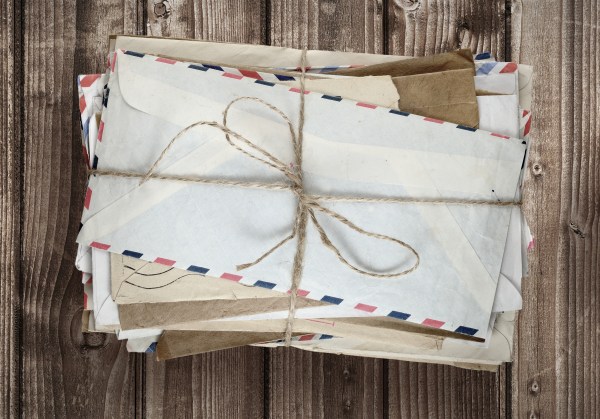 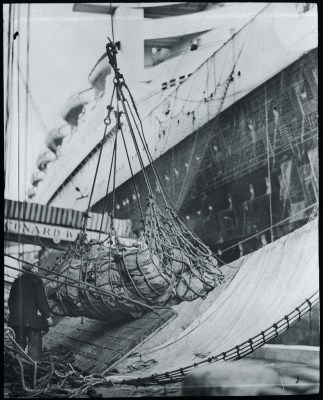 END_OF_DOCUMENT_TOKEN_TO_BE_REPLACED

[Ash] built Moo-Bot, a robot cow scarecrow to enter the competition at a local scarecrow festival. We’re not sure if Moo-bot will win the competition, but it sure is a winning hack for us. [Ash]’s blog is peppered with delightful prose and tons of pictures, making this an easy to build project for anyone with access to basic carpentry and electronics tools. One of the festival’s theme was “Out of this World” for space and sci-fi scarecrows. When [Ash] heard his 3-year old son sing “hey diddle diddle, the cat and the fiddle…”, he immediately thought of building a cow jumping over the moon scarecrow. And since he had not seen any interactive scarecrows at earlier festivals, he decided to give his jumping cow a lively character.

Construction of the Moo-Bot is broken up in to three parts. The skeleton is built from lumber slabs and planks. The insides are then gutted with all of the electronics. Finally, the whole cow is skinned using sheet metal and finished off with greebles to add detailing such as ears, legs, spots and nostrils. And since it is installed in the open, its skin also doubles up to help Moo-bot stay dry on the insides when it rains. To make Moo-Bot easy to transport from barn to launchpad, it’s broken up in to three modules — the body, the head and the mounting post with the moon.

Moo-Bot has an Arduino brain which wakes up when the push button on its mouth is pressed. Its two OLED screen eyes open up, and the MP3 player sends bovine sounding audio clips to a large sound box. The Arduino also triggers some lights around the Moon. Juice for running the whole show comes from a bank of eight, large type “D” cells wired to provide 6 V — enough to keep Moo-Bot fed for at least a couple of months.

Check out the video after the break to hear Moo-bot tell some cow jokes – it’s pretty funny. We’re rooting for it to win the competition — Go Moo-bot.