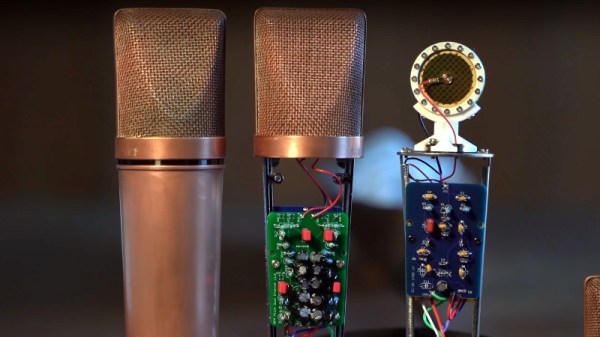 There was a time when a microphone for most people was a cheap plastic affair that probably came for free with their sound card, but in the age of pandemic video streaming no desktop is complete without a chunky model that looks for all the world as though it escaped from a studio. Few people make their own microphones, so the work of [DJJules] in building very high quality condenser microphones is a particularly fascinating read.

A condenser microphone is a capacitor in which one plate is formed by a conductive diaphragm. A bias voltage is supplied to the diaphragm via a resistor, and since the charge on the plate remains constant as its capacitance changes with the sound vibrations, the voltage on the capacitor changes accordingly. This is picked up by a high impedance buffer and from there fed to a normal microphone input. This Instructable uses a commercial condenser microphone capsule, and takes the reader through generating the bias voltage for it before describing the op-amp buffer circuit.

The most interesting part comes at the end, as we’re shown how the sensitivity pattern of a dual-microphone array can be tuned to be omnidirectional, cardoid, or figure-of-eight. This is probably the norm among audio engineers, but we rarely see this sort of insight in our community. We may never build a microphone of our own, but it’s fascinating to see this one from the ground up in the video below the break.