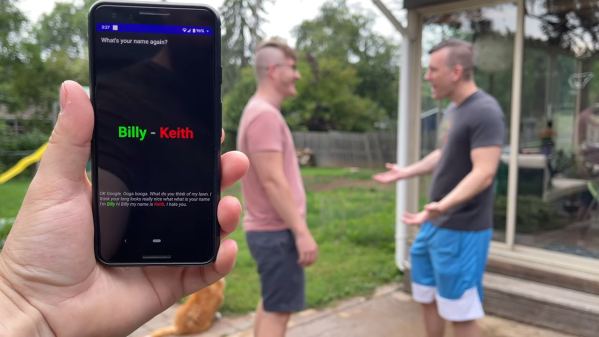 Depending on your point of view, real-life conversations with strangers can either be refreshing or terrifying. Some of us are glib and at ease in new social situations, while others are sure that the slightest flub will haunt them forever. And perhaps chief among these conversational faux pas is forgetting the name of the person who just introduced themselves a few seconds before.

Rather than commit himself to a jail of shame on such occasions, [Caleb] fought back with this only slightly creepy name-recalling smartphone app. The non-zero creep factor comes from the fact that, as [Caleb] points out, the app crosses lines that most of us would find unacceptable if Google or Amazon did it — like listening to your every conversation. It does this not to direct ads to you based on your conversations, but to fish out the name of your interlocutor from the natural flow of the conversation.

It turns out to be a tricky problem, even with the help of named-entity recognition (NER), which basically looks for the names of things in natural text. Apache OpenNLP, the NER library used here, works well at pulling out names, but figuring out whether they’re part of an introduction or just a bit of gossip about a third party is where [Caleb] put the bulk of his coding effort. That, and trying to make the whole thing at least a little privacy-respecting. See the video below for a demo.

To be sure, this doesn’t do much more than a simple, ‘remind me of your name again?’ would, but without the embarrassment. It’s still pretty cool though, and we’re especially jazzed to learn about NER and the tons of applications for it. Those are projects for a future day, though. We’re just glad to see that [Caleb] has moved on from monitoring the bodily functions of his dog and his kid. At least for now.

END_OF_DOCUMENT_TOKEN_TO_BE_REPLACED

If you’ve ever wondered how people are really feeling during a conversation, you’re not alone. By and large, we rely on a huge number of cues — body language, speech, eye contact, and a million others — to determine the feelings of others. It’s an inexact science to say the least. Now, researchers at MIT have developed a wearable system to analyze the tone of a conversation.

The system uses Samsung Simband wearables, which are capable of measuring several physiological markers — heart rate, blood pressure, blood flow, and skin temperature — as well as movement thanks to an on-board accelerometer. This data is fed into a neural network which was trained to classify a conversation as “happy” or “sad”. Training consisted of capturing 31 conversations of several minutes duration each, where participants were asked to tell a happy or sad story of their own choosing. This was done in an effort to record more organic emotional states than simply eliciting emotion through the use of more typical “happy” or “sad” video materials often used in similar studies.

The technology is in a very early stage of development, however the team hopes that down the road, the system will be sufficiently advanced to act as an emotional coach in real-life social situations. There is a certain strangeness about the idea of asking a computer to tell you how a person is feeling, but if humans are nothing more than a bag of wet chemicals, there might be merit in the idea yet. It’s a pretty big if.

Machine learning is becoming more powerful on a daily basis, particularly as we have ever greater amounts of computing power to throw behind it. Check out our primer on machine learning to get up to speed.

END_OF_DOCUMENT_TOKEN_TO_BE_REPLACED I met up with [Kenji Larsen] at HOPE X last weekend, and I’m fairly certain he was the coolest person at a conference full of really cool people. Talking to him for a little bit, you get a sense of what it would be like to speak with [Buckmister Fuller], [Tesla], or any of the other ‘underappreciated, but not by people in the know’ minds scattered about history. I’ll just let his answers to our hacker bio questions demonstrate that.

[Kenji]’s project for The Hackaday Prize is the Reactron Overdrive. It’s not just one board he’s building here, but an entire suite of sensors, interfaces, and nodes that form a complete human to machines – note the plural ‘machines’ – interface. When you consider that no one knows what the Internet of Things actually is, and that [Kenji] is working on IoT 3.0, you get a sense that there’s really something here. Also, his project log has a Tron Recognizer in it. That has to count for something, right?