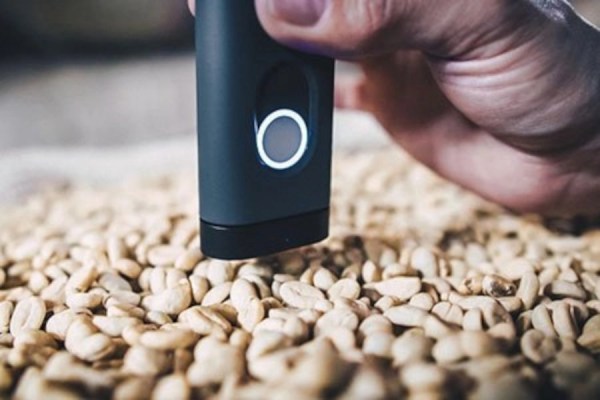 If you’ve ever bought whole coffee beans, chances are good that there was all kinds of information on the bag that led to your decision, like the origin, the roast type, and the flavor notes. Traditionally, coffee grading — that’s judging the aroma of both dry and wet grounds and slurping the coffee evenly across the tongue to determine the flavor profile — is done by humans in a process called cupping. To call it a process is too clinical — it’s really more like a ceremony performed with the grave sincerity that coffee deserves.

There’s an industry standard coffee flavor wheel, so why not leverage that to make a robot that can remove the human bias and possible error of doing things the traditional way? That’s exactly what Demetria, a Columbian-Israeli company is doing.

They’ve developed an AI platform that can determine bean quality as judged by handheld scanners that were born on Kickstarter. The scanner uses near-infrared to look for biochemical markers in the bean, which it uses to match up with a profile backed by the all-knowing coffee flavor wheel.

Demetria is using SCiO scanners and a custom app to judge beans before they’re even roasted, which greatly speeds up the process but makes us wonder how green bean spectroscopy stacks up against roasted beans as judged by humans. You may remember the SCiO, a pocket-sized, connected spectrometer made by Consumer Physics that finally started delivering the goods a few years after funding. If you got your hands on a SCiO, you might like to know that there’s an open project out there to hack them. Sparkfun did a nice, thorough teardown, and it seems to be a well-engineered piece of hardware.

On the one hand, cupping is a tradition and thus may people feel that robbing coffee of this tradition will rob coffee of its soul. On the other hand, cupping is wasteful, as the coffee must be roasted and ground immediately prior to the ceremony and it requires the availability of Q graders who have been trained in the ways of coffee grading.

Want to know more about coffee production? Might as well learn the Retrotechtacular way.

[Main and thumbnail images via Demetria]