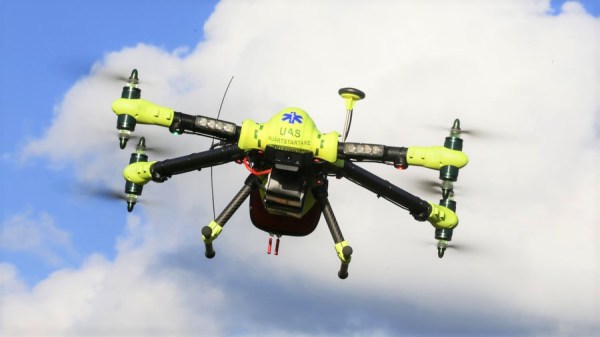 The advent of the automatic external defibrillator (AED) has increased the odds for survival of out-of-hospital cardiac arrest (OHCA), but the penetration of AEDs into public settings is far from complete enough to put one within a few minutes reach of everyone who might need one. So it’s only natural that thoughts would turn to delivering AEDs to cardiac incidents by drones. It seems like a great idea, but will it work? END_OF_DOCUMENT_TOKEN_TO_BE_REPLACED

There’s a lot of implantable medical technology that is effectively a black box. Insulin pumps monitor blood sugar and deliver insulin, but you can’t exactly plug in a USB cable and download the data. Pacemakers and cardiac defibrillators are the same way. For these patients, data is usually transmitted to a base station, then sent over the Internet to help doctors make decisions. The patient never gets to see this data, but with a little work and a software defined radio, a team on Hackaday.io is cracking the code to listen in on these implanted medical devices.

The team behind ICeeData was assembled at a Health Tech Hackathon held in Latvia last April. One of the team members has an implanted defibrillator keeping her ticker in shape, and brought along her implant’s base station. The implant communicates via 402-405MHz radio, a region of the spectrum that is easily accessible by a cheap RTL-SDR TV Tuner dongle.

Right now the plan is to intercept the communications between the implant and the base station, decode the packets, decipher the protocol, and understand what the data means. It’s a classic reverse engineering task that would be the same for any radio protocol, only with this ones, the transmissions are coming from inside a human.

Bryan is a computer neophyte (he needs help turning his computer on), but he has a basketball story. His team was playing in a crucial basketball playoff game at the club. They were down by two late in the game and he just couldn’t get one of his players to play defense. This player was a great shooter and that is about it — burying a three that put the team up for the first time. After sinking it he just stood there admiring his masterpiece while Bryan screamed at him to get back on defense (he rarely played D and he didn’t that game either). Instead, he flat lined and went down on his face– heart attack!

Of course that player was me and that was an awful day. But I’m still around to tell the story… as a hardware designer years before I didn’t know that I’d bet everything on one particular project.