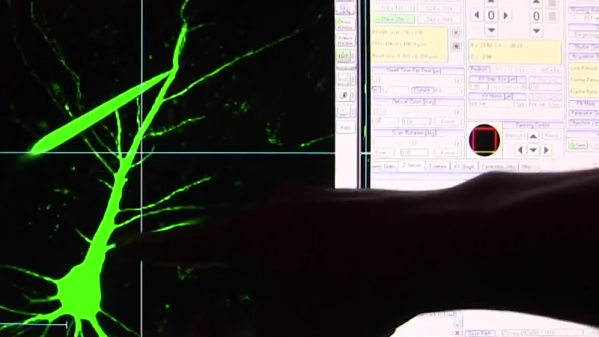 Neural networks use electronic analogs of the neurons in our brains. But it doesn’t seem likely that just making enough electronic neurons would create a human-brain-like thinking machine. Consider that animal brains are sometimes larger than ours — a sperm whale’s brain weighs 17 pounds — yet we don’t think they are as smart as humans or even dogs who have a much smaller brain. MIT researchers have discovered differences between human brain cells and animal ones that might help clear up some of that mystery. You can see a video about the work they’ve done below.

Neurons have long finger-like structures known as dendrites. These act like comparators, taking input from other neurons and firing if the inputs exceed a threshold. Like any kind of conductor, the longer the dendrite, the weaker the signal. Naively, this seems bad for humans. To understand why, consider a rat. A rat’s cortex has six layers, just like ours. However, whereas the rat’s brain is tiny and 30% cortex, our brains are much larger and 75% cortex. So a dendrite reaching from layer 5 to layer 1 has to be much longer than the analogous neuron in the rat’s brain.

These longer dendrites do lead to more loss in human brains and the MIT study confirmed this by using human brain cells — healthy ones removed to get access to diseased brain cells during surgery. The researchers think that this greater loss, however, is actually a benefit to humans because it helps isolate neurons from other neurons leading to increased computing capability of a single neuron. One of the researchers called this “electrical compartmentalization.” Dig into the conclusions found in the research paper.

We couldn’t help but wonder if this research would offer new insights into neural network computing. We already use numeric weights to simulate dendrite threshold action, so presumably learning algorithms are making weaker links if that helps. However, maybe something to take away from this is that less interaction between neurons and groups of neurons may be more helpful than more interaction.

Watching them probe neurons under the microscope reminded us of probing on an IC die. There’s a close tie between understanding the brain and building better machines so we try to keep an eye on the research going on in that area.