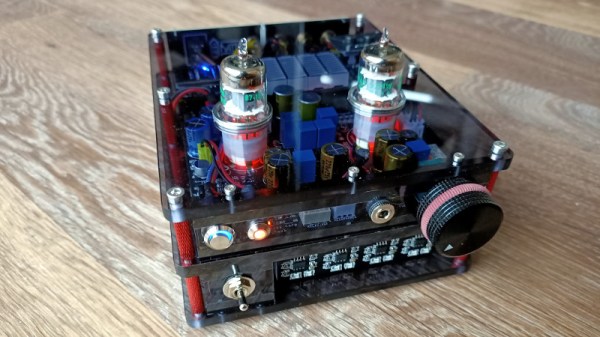 Once a discarded relic, over the years the humble vacuum tube has been rehabilitated in the arena of specialist audio. There are plenty of tube amplifiers now being manufactured, with a popular choice being headphone amplifiers that use a tube as a gain stage followed by an op-amp as a buffer with a low impedance output. This forms the basis of [Ratti3]’s amplifier, but with the added interest of a battery supply and a Bluetooth connection.

The tube circuit is a very conventional anode follower using an EF95 pentode. This provides plenty of gain and of course that “valve sound” beloved of audio enthusiasts, but suffers from an output impedance too high to drive a set of headphones. An NE5532 steps in for the op-amp buffer role, making for a very simple circuit. Power comes from a set of four 18650 Lithium-Ion cells with associated charger and balance boards, while a little switching boost converter provides the 100 volt HT for the tubes.

We’ve visited this type of amplifier before with a similar but much more rough-around-the-edges Chinese version. That had some astonishingly cheap Chinese tubes, but if we’re seeking better components it’s interesting to know just who makes tubes these days.