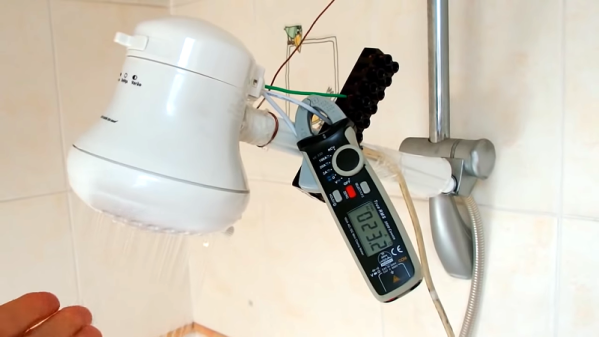 We have bought some really amazing stuff from the Chinese online shops. We’ve also bought stuff that was… less than satisfactory, let’s say. At the prices you pay, you usually just chalk up the bad stuff as a cost of doing business. But [DiodeGoneWild] has a teardown of something that could be very dangerous if it wasn’t up to snuff: an electrically heated shower head. He says they are common in Latin America and have the nickname “suicide showers.”

We’ve seen the cute showerheads that change color, but those take batteries. What we are talking about here connects to the 220V main and draws 30A to instantly heat your shower water. Environmentally, that’s great since you don’t have a tank of water you keep heating and reheating just in case you need hot water. But you wouldn’t throw an AC radio in the tub, so you have to wonder just how safely this thing’s built. Well, you don’t have to wonder, because the videos below are going to show us.

END_OF_DOCUMENT_TOKEN_TO_BE_REPLACED

Hackaday, we have a problem. Clean water is precious and we want to come up with some ideas to help conserve it. Today’s topic is water wasted while showering. Let’s kick around some ideas and prompt some new builds for The Hackaday Prize.

We’ve all done it; your mind wanders and before you know it you’ve been standing in the shower for far too long. How much water have you wasted? Who know’s, there’s no feedback loop in the shower. But we think adding a little bit of feedback is a fantastic avenue to help combat wasteful habits.

What if the showerhead changed colors based on how much water had flowed through it? We’ve already seen consumer showerheads that have the LEDs inside of them, and flow meters are readily available. Start your shower off in the green, as you lather up the suds it moves through blue, purple, orange, red, and finally to flashing red. It doesn’t have to be annoying, but just enough to help quantify how much is pouring down the drain.

We were big fans of the game SSX Tricky back in the day. The better you were at tricks, the better the music was. If you crashed hard, you’d be listening to nothing more than hi-hat and subdued bass. Apply this to shower time. What if that flow meter you installed on your shower head was connected to a shower radio? Start it off with the best music in the world and progress to the lamest as you run the reservoir dry (ymmv on these selections of course).

If you shave off 5 seconds from your shower it will have a tiny impact in your household. But imagine the aggregate of every household in the world doing so.

This is part of what the 2015 Hackaday Prize is all about. Get the idea machine rolling. Tell us your riff on the shower feedback loop in the comments below. Put up a new project on Hackaday.io, write down an idea, and tag it “2015HackadayPrize”. We’re on the lookout for the best seed ideas and will be giving away shirts and stickers to the ones that show real promise. We’ll be featuring some of these in future installments of “Hackaday, We Have Problem” and if we choose yours it’ll land you with some swag of your own.

[Jake] built himself a solar water heater. The system has an 82 gallon insulated water tank and uses a solar collection grid made of PVC pipe. As the water heats, it rises to the top of the collector and runs into the tank while pulling colder water from the bottom of the tank back into the collector.

A sunny day yields temperatures around 130 degrees Fahrenheit. On a cloudy day the water can still be heated to about 90 Fahrenheit. This is about 19 degrees cooler that one might desire but the difference is made up by an electric shower head that heats as the water comes out. [Jake’s] system, seen in the video after the break, allows him to forgo the use of electricity on sunny days, and reduce its use by around half on cloudy days. END_OF_DOCUMENT_TOKEN_TO_BE_REPLACED