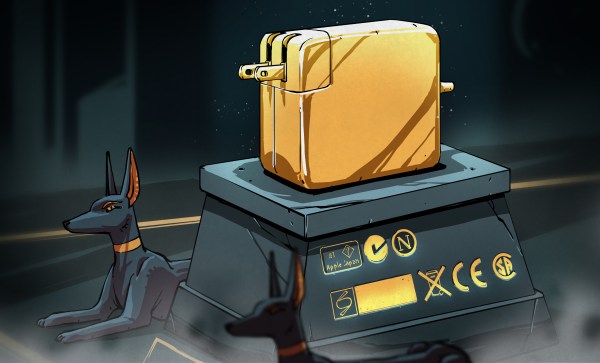 Look on the back of your laptop charger and you’ll find a mess of symbols and numbers. We’d bet you’ve looked at them before and gleaned little or no understanding from what they’re telling you.

These symbols are as complicated as the label on the tag of your shirt that have never taught you anything about doing laundry. They’re the marks of standardization and bureaucracy, and dozens of countries basking in the glow of money made from issuing certificates.

The switching power supply is the foundation of many household electronics — obviously not just laptops — and thus they’re a necessity worldwide. If you can make a power supply that’s certified in most countries, your market is enormous and you only have to make a single device, possibly with an interchangeable AC cord for different plug types. And of course, symbols that have meaning in just about any jurisdiction.

In short, these symbols tell you everything important about your power supply. Here’s what they mean.

END_OF_DOCUMENT_TOKEN_TO_BE_REPLACED

If you turn over almost any electronic device, you should find all those compliance logos: CE, FCC, UL, TÜV, and friends. They mean that the device meets required standards set by a particular region or testing organisation, and is safe for you, the consumer.

Among those standards are those concerning EMC, or ElectroMagnetic Compatibility. These ensure that the device neither emits RF radiation such that it might interfere with anything in its surroundings, nor is it unusually susceptible to radiation from those surroundings. Achieving a pass in those tests is something of a black art, and it’s one that [Pero] has detailed his exposure to in the process of seeing a large 3-phase power supply through them. It’s a lengthy, and fascinating post.

He takes us through a basic though slightly redacted look at the device itself, before describing the testing process, and the EMC lab. These are fascinating places with expert staff who can really help, though they are extremely expensive to book time in. Since the test involves a mains power supply he describes the Line Impedance Stabilisation Network, or LISN, whose job is to safely filter away the RF component on the mains cable, and present a uniform impedance to the device.

In the end his device failed its test, and he was only able to achieve a pass with a bit of that black magic involving the RF compliance engineer’s secret weapons: copper tape and ferrite rings. [Pero] and his colleagues are going to have to redesign their shielding.

We’ve covered our visits to the EMC test lab here before.

There is one man whose hour-long sessions in my company give me days of stress and worry. He can be found in a soundless and windowless room deep in the bowels of an anonymous building in a town on the outskirts of London. You’ve probably driven past it or others like it worldwide, without being aware of the sinister instruments  that lie within.

The man in question is sometimes there to please the demands of the State, but there’s nothing too scary about him. Instead he’s an engineer and expert in electromagnetic compatibility, and the windowless room is a metal-walled and RF-proof EMC lab lined with ferrite tiles and conductive foam spikes. I’m there with the friend on whose work I lend a hand from time to time, and we’re about to discover whether all our efforts have been in vain as the piece of equipment over which we’ve toiled faces a battery of RF-related tests. As before when I’ve described working on products of this nature the specifics are subject to NDAs and in this case there is a strict no-cameras policy at the EMC lab, so yet again my apologies as any pictures and specifics will be generic.

There are two broadly different sets of tests which our equipment will face: RF radiation, and RF injection. In simple terms: what RF does it emit, and what happens when you push RF into it through its connectors and cables? We’ll look at each in turn as a broad overview pitched at those who’ve never seen inside an EMC lab, sadly there simply isn’t enough space in a Hackaday article to cover every nuance.