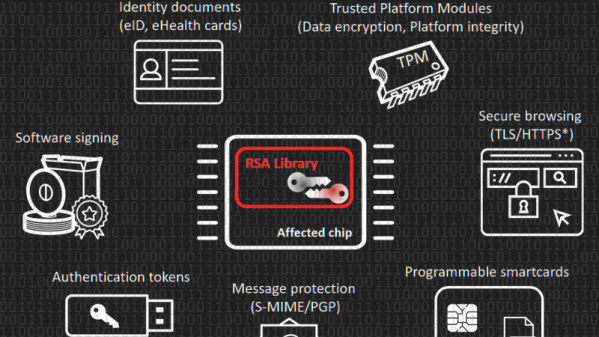 So, erm… good news everyone! A vulnerability has been found in a software library responsible for generating RSA key pairs used in hardware chips manufactured by Infineon Technologies AG. The vulnerability, dubbed ROCA, allows for an attacker, via a Coppersmith’s attack, to compute the private key starting with nothing more than the public key, which pretty much defeats the purpose of asymmetric encryption altogether.

The researchers found and analysed vulnerable keys in various domains including electronic citizen documents (750,000 Estonian identity cards), authentication tokens, trusted boot devices, software package signing, TLS/HTTPS keys and PGP. The currently confirmed number of vulnerable keys found is about 760,000 but could be up to two to three orders of magnitude higher.

Devices dating back to at least 2012 are affected, despite being NIST FIPS 140-2 and CC EAL 5+ certified.. The vulnerable chips were not necessarily sold directly by Infineon Technologies AG, as the chips can be embedded inside devices of other manufacturers.

END_OF_DOCUMENT_TOKEN_TO_BE_REPLACED

If you want to factor a number, one way to do it is Shor’s algorithm. That’s a quantum algorithm and finds prime factors of integers. That’s interesting because prime factorization is a big deal of creating or breaking most modern encryption techniques.

Back in 2001, a group at IBM factored 15 (the smallest number that the algorithm can factor) using a 7 qubit system that uses nuclear magnetic resonance. Later, other groups duplicated the feat using photonic qubits. Typical implementations take 12 qubits. However, recent work at MIT and the University of Innsbruck can do the same trick with 5 atoms caught in an ion trap. The researchers believe their implementation will easily scale to larger numbers.