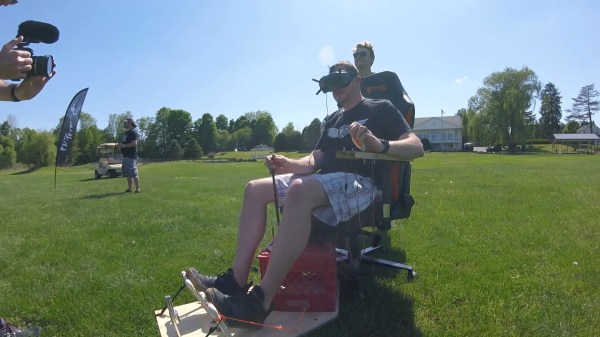 First-person view, or FPV, has become hugely popular in RC flying circles. A pair of video goggles lets the pilot fly with vision from the plane itself. To make things even more realistic, the team at [FliteTest] built a replica cockpit with working controls and took it down to the field for testing. (Video, embedded below.)

Since the pilot is wearing video goggles, aesthetics aren’t the key here. A RC transmitter was gutted for its gimbal and potentiometers. The former fitted with a long stick for aileron and elevator control, and the latter hooked up to pedals for the rudder. There’s even a proper throttle handle. It’s a low-budget build, with PVC pipe and bungee straps doing much of the work, but that doesn’t detract from the fun factor one bit. The team later upped the stakes, flying a faster model with the rig at speeds up to 120 mph.

Interesting to note is the somewhat visceral reaction by the pilot when crashing, as the combination of first-person view video and realistic controls gives a powerful sense that one is actually in a real plane. FPV flying actually has a longer history than you might expect, with roots as far back as the 1980s. END_OF_DOCUMENT_TOKEN_TO_BE_REPLACED