END_OF_DOCUMENT_TOKEN_TO_BE_REPLACED

Old solutions are often so elegant and effective that they keep coming back. The gasometer, or gas holder, is one such example. Now [NightHawkInLight] has built one for storing the wood gas he’s been experimenting with, and it’s pretty neat to watch it rise and fall as he first adds gas and then burns it off. The mechanism couldn’t be simpler. 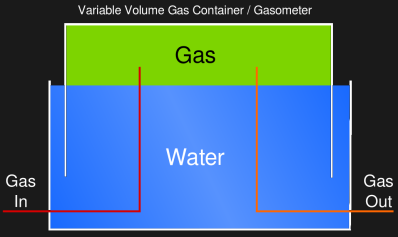 For those who, like us, are hearing about this low tech for the first time, gasometers are a means of safely storing gas stemming from the 1700s when gas was king and electricity was little more than a gentleman scientist’s pursuit. In its simplest form, it consists of a container of water with another container filled with gas sitting upside down in the water. Gas pressure is controlled by the weight of the gas-filled container and the water provides a seal, preventing the gas from escaping. Adding gas simply raises the gas-filled container, and removing or using gas lowers it. Simple, safe, and elegant.

We’ll leave the details of how he made his gasometer to the video below, but suffice it to say that his use of a double-walled gas pipe originally intended as a furnace chimney just adds more elegance to this whole hack.

[NightHawkInLight’s] cool projects have graced the pages of Hackaday before. For example, in the area of gas alone there’s his propane-powered plasma rifle, his transparent hybrid rocket engine, and his thermic lance which was hot enough to melt rocks.