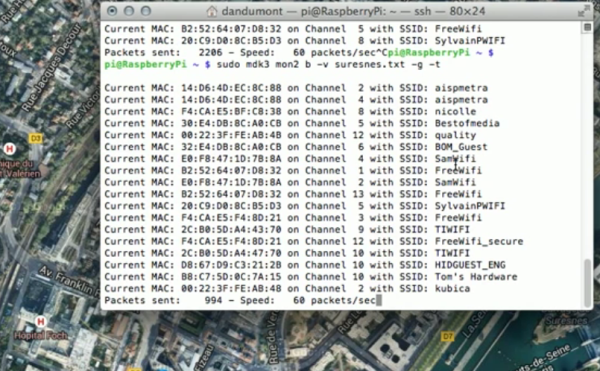 [Pierre Dandumont] just finished up a little project that will give Google Maps’ location feature a run for its money. It’s a technique that spoofs WiFi networks in order to relocate the positional data reported via WiFi networks.

He starts with an explanation of the different ways modern devices acquire location data. GPS is the obvious, and mobile network triangulation is pretty well know. But using WiFi networks may be a new trick for you. We’re not 100% certain but we think Google is able to look up location data based on known IP addresses for WiFi access points (this would be a good comments discussion). To trick the system all you have to do is feed some captured AP data into the computer before Google Maps tried to lock onto a location. The video after the break shows Maps with the legit location displayed. After running a quick script whose output is shown above the map position is changed to the spoofed location.

END_OF_DOCUMENT_TOKEN_TO_BE_REPLACED

We really wish we had a little more information on the construction of this, but [Jeff] made this APRS tracker several years ago. APRS, or Automatic Packet Reporting System is a system where shortwave radios put out small packets of data that are uploaded to a database available via the web. This specific one is relaying GPS data so his family can see where they are located. With current phones, you might think this is antiquated, but he notes that he took this through New Mexico and was able to transmit his position even when there was zero cell phone coverage.