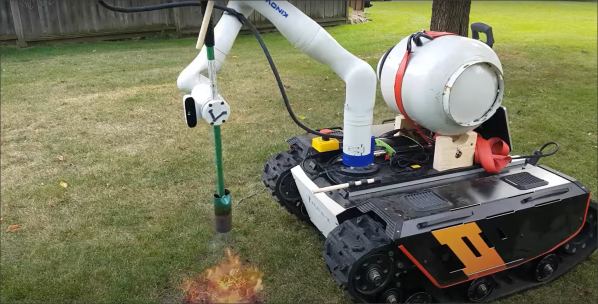 You know how it goes, you’re just hanging out in the yard, there aren’t enough hours in the day, and weeding the lawn is just such a drag. Then an idea just pops into your head. How about we attach a gas powered flamethrower to a robot arm, drive it around on a tank-tracked robotic base, and have it operate autonomously with an AI brain? Yes, that sounds like a good idea. Let’s do that. And so, [Dave Niewinski] did exactly that with his Ultimate Weed Killing Robot.

And you thought the robot overlords might take a more subtle approach and take over the world one coffee machine at a time? No, straight for the fully-autonomous flamethrower it is then.

This build uses a Kinova Robots Gen 3 six-axis arm, mounted to an Agile-X Robotics Bunker base. Control is via a Connect Tech Rudi-NX box which contains an Nvidia Jetson Xavier NX Edge AI computing engine. Wow that was a mouthful!

Connectivity from the controller to the base is via CAN bus, but, sadly no mention of how the robot arm controller is hooked up. At least this particular model sports an effector mount camera system, which can feed straight into the Jetson, simplifying the build somewhat.

To start the software side of things, [Dave] took a video using his mobile phone while walking his lawn. Next he used RoboFlow to highlight image stills containing weeds, which were in turn used to help train a vision AI system. The actual AI training was written in Python using Google Collaboratory, which is itself based on the awesome Jupyter Notebook (see also Jupyter Lab on the main site. If you haven’t tried that yet, and if you do any data science at all, you’ll kick yourself for not doing so!) Collaboratory would not be all that useful for this by itself, except that it gives you direct, free GPU access, via the cloud, so you can use it for AI workloads without needing fancy (and currently hard to get) GPU hardware on your desk.

Details of the hardware may be a little sparse, but at least the software required can be found on the WeedBot GitHub. It’s not like most of us will have this exact hardware lying around anyway. For a more complete description of this terrifying contraption, checkout the video after the break.