Over the years, the media has managed to throw together some pretty ridiculous visual depictions of computer hacking. But perhaps none have gone as far down the road of obfuscation as The Matrix, where the most experienced hackers are able to extract information from a display of cascading green glyphs like a cyberpunk version of reading tea leaves. It’s absolutely ridiculous, with zero basis in reality.

Well, maybe not anymore. Taking a page from these outlandish visions of hacking, [Erik Bosman] has constructed a dedicated hex dump display out of fourteen segment alphanumeric LEDs that looks like it could be pulled from a movie set. But make no mistake, it’s more than just a pretty face. By cleverly varying the brightness of the individual characters, he’s managed to make his so-called “hexboard” completely usable despite the fact that everything’s the same color. 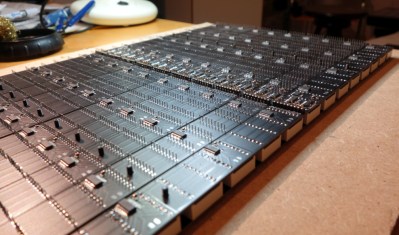 While he says the project is not quite at 100% yet, he’s already released the firmware, computer-side software, and even the PCB design files for anyone who might want to build their own version. Though as you might imagine, it’s quite a tall order.

The display is broken up into segments holding eight Houkem-5421 LED modules apiece, each with its own STM32F030F4 and two TC7258E LED controllers. The bill of materials on this one is a bit intimidating, but when the end result look this good it’s hard to complain.

To build a somewhat smaller version that also features a more retro vibe, you might consider doing something similar by chaining together vintage LED “bubble” displays.

It’s not uncommon for hackers to have a particular delectation for unusual interior decoration. Maybe it’s a Nixie tube clock, or a vacuum fluorescent display reading out the latest tweets from a favorite chatbot. If this sounds like your living room already, perhaps you’d like some of these file format posters to adorn your walls. 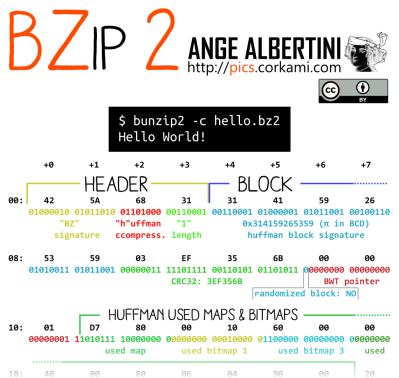 The collection of images includes all kinds of formats — GIF, ZIP and WAV are all represented, but it even gets into some real esoterica — DOLphin format executables are here if you’re a total GameCube fanatic. Each poster breaks down the format into parts, such as the header, metadata and descriptor sections, and come in a variety of formats themselves — most available in SVG, PDF and PNG.

If we’re totally honest, these aren’t all designed for hanging on your wall as-is — we’d consider putting some work into to optimize the color palettes and layouts before putting these to print. But regardless, they’re an excellent visual representation of data structures that you might find particularly useful if you need to do some reverse engineering down the track.

If you still have wall space available after seeing this, here’s the electronic reference poster that should fill it.

[Thanks to JD for the tip!]