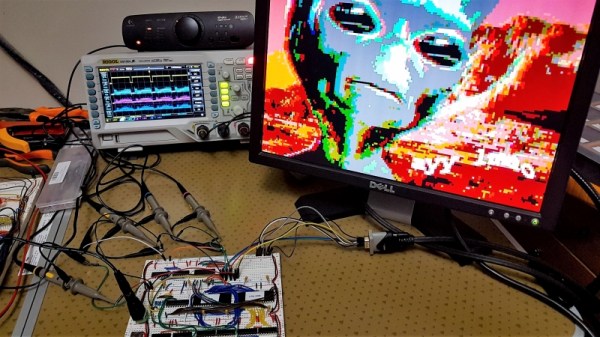 For whatever reason, the Video Graphics Array standard seems to attract a lot of hardware hacks. Most of them tend to center around tricking a microcontroller into generating the signals needed to send images to a VGA monitor. We love those hacks, but this one takes a different tack – a microcontroller-free VGA display that uses only simple logic chips and EEPROMs.

When we first spied this project, [PH4Nz] had not yet shared his schematics and code, but has since posted everything on GitHub. His original description was enough to whet our appetite, though. He starts with a 27.175-MHz clock and divides that by 4 with a 74HCT163, which has the effect of expanding the 160×240 pixels image stored in one of the EEPROMs to 640×480. Two 8-bit counters keep track of horizontal and vertical positions, while the other EEPROM takes care of generating the Hsync and Vsync signals. It’s all quite hackish, but it works. [PH4Nz] tells us that the whole thing is in support of a larger project: an 8-bit computer made from logic chips. We’re looking forward to seeing that one too.

This isn’t the first microcontroller-less VGA project we’ve seen, of course. Here’s a similar one also based on EEPROMs, and one with TTL logic chips. And we still love VGA on a microcontroller such as the ESP32; after all, there’s more than one way to hack.

Thanks to [John U] for the tip.

[bekeband] recently came across an old industrial monitor. It’s small, monochrome, has a beautiful green phosphor, and does not accept a composite signal. Instead, there’s a weird TTL input with connectors for horizontal sync, vertical sync, and video. Intrigued, [bekeband] brought it home and started working on a project that would drive this monitor. He succeeded, and with a chip we don’t see much of on the Hackaday tips line: a 16-bit PIC.

The project uses the dsPIC30F3011, a strange little 16-bit PIC in a 40-pin package. The board for this build actually comes from an earlier build, and after connecting the horizontal sync, vertical sync, and video to this tiny board, [bekeband] started writing some code.

There are two programs written for this board. The first is a static image tester that displays a single image on the CRT. The second is one that displays a simple animation, in this case, a horse running in place. It’s not the fanciest project, but it does work, and even though [bekeband] isn’t using a high-speed ARM, he is getting a reasonably high resolution out of this chip.