Industrial robot arms are curious devices, found everywhere from the back of old engineering classrooms where they taught kinematics in the 90s, to the factory floor where they do the same thing over and over again while contemplating their existence. For his Hackaday Prize entry, [Dan] is building a big robot arm. It’s not big enough to ride on, but it is large enough to automate a few processes in a reasonably well-equipped lab.

This is not a tiny robotic arm powered by 9 gram hobby servos. For the bicep and tricep of [Dan]’s arm, he’s using linear actuators – they’re high precision and powerful. A few months ago, [Dan] tried to design a hypocycloid gear but couldn’t get a $3000 prototype to work. Although the hypocycloid is out, he did manage to build a strange differential pan/roll mechanism for the wrist of the arm. It really is a thing of beauty, and with the engineering [Dan] has put into it, it’s a very useful tool.

If you’d like to meet [Dan]’s robot arm in person, he’ll be at the 2015 NYC Maker Faire this weekend. Check out [Dan]’s Hackaday Prize video for his robot arm below.

END_OF_DOCUMENT_TOKEN_TO_BE_REPLACED 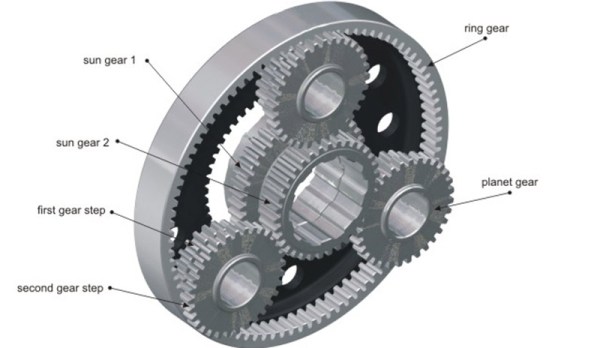 [Dan Royer] is hard at work building his own personal robot army. Robots mean motors, and motors mean gearboxes. In [Dan]’s case, gearboxes mean $3000 wasted on a prototype that doesn’t work. Why doesn’t it work? He doesn’t know, and we don’t either.

[Dan] would like to use small but fast DC motors for his robots coupled to a gearbox to step down the speed and increase the torque. The most common way of doing this is with a planetary gear set, but there’s a problem with the design of planetary gears – there is inherent backlash and play between the gears. This makes programming challenging, and the robot imprecise.

A much better way to gear down a small DC motor is a hypocycloid gear. If you’ve ever seen the inside of a Wankel engine, this sort of gearing will look very familiar: a single gear is placed slightly off-axis inside a ring gear. On paper, it works. In reality, not so much.

[Dan] spent $3000 on a prototype hypocycloid gearbox that doesn’t turn without binding or jamming. The gear was made with incredible tolerances and top quality machining, but [Dan] has a very expensive paper weight sitting on his desk right now.

If anyone out there has ever designed or machined a hypocycloid gearbox that works, your input is needed. The brightest minds [Dan] met at the Bring A Hack event at Maker Faire last weekend could only come up with. ‘add more lasers’, but we know there’s a genius machinist out there that knows exactly how to make this work.

Hackaday Fail is a column which runs every now and again. Help keep the fun rolling by writing about your past failures and sending us a link to the story — or sending in links to fail write ups you find in your Internet travels.