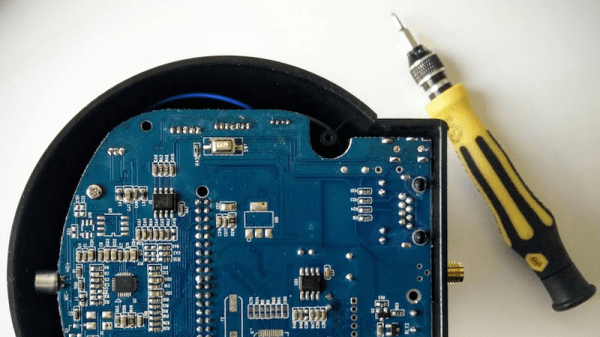 So you bring home a shiny new gadget. You plug it into your network, turn it on, and it does… well, whatever it wants. Hopefully, it does what you expect and no more, but there is no guarantee: it could be sending your network traffic to the NSA, MI5 or just the highest bidder. [Jelmer] decided to find out what a new IP camera did, and how easy it was to find out by taking a good poke around inside.

In his write-up of this teardown, he describes how he used Wireshark to see who the camera was talking to over the Interwebs, and how he was able to get root access to the device itself (spoilers: the root password was 1234546). He did this by using the serial interface of the Ralink RT3050 that is the brains of the camera to get in, which provided a nice console when he asked politely. A bit of poking around found the password file, which was all too easily decrypted with John the ripper.

This is basic stuff, but if you’ve never opened up an embedded Linux device and gotten root on it, you absolutely should. And now you’ve got a nicely written lesson in how to do it. Go poke around inside the things you own! 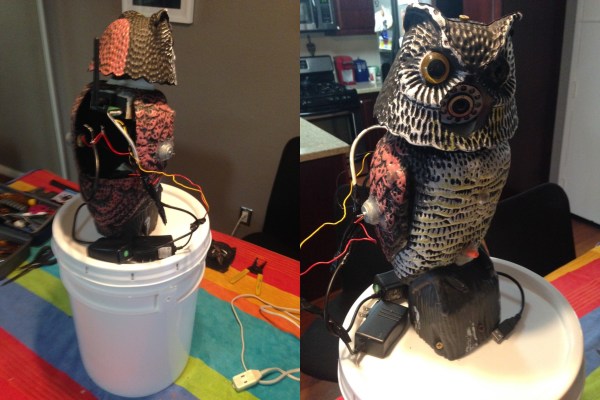 Tired of the local squirrels tearing up his balcony garden, 11[metroSFVogange] took matters into his own hands and created this, the Squirrelinator 2000.

He had tried buying repellents and other home remedies, but nothing seemed work. And his poor indoor cat was starting to feel emasculated, as he watched through the window helplessly as his owner’s garden was destroyed by the furry terrorists.

It’s built off of an old IP camera he had collecting dust, which happens to have an alarm I/O port… perfect. To disguise the camera he picked up a owl statue for cheap from the hardware store because it was missing an eye — he plans to add a glowing red terminator eye later on, because why not?

After modifying the owl to fit the IP camera, he can now control the owl’s head with the pan and tilt functions of the camera — accessible by smartphone. He’s also thrown on a pair of solar-powered spinning props to help scare off the squirrels as well. In case that’s not enough, when the motion sensor goes off the owl shoots a squirt gun and takes pictures of the (hopefully soaked) squirrel for internet points. Classy.

Sadly, it seems to be working because he hasn’t caught any squirrels in his garden yet! We will of course update this post if a poor sucker attempts to mess with his begonias again.