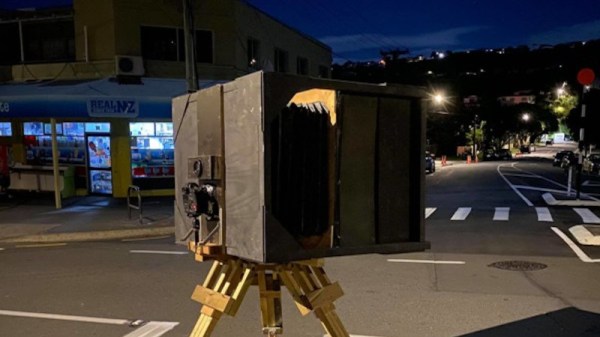 When fate lands a very high quality lens in front of you, what do you do with it? If you are [Tim Hamilton], the solution is obvious. Use it in a huge large-format camera.

The lens came from a newspaper magnifier made redundant by digitalisation and used as a paperweight. It’s an extremely high quality piece of optical equipment so seeing it wasted in this way was a source of distress. So after characterising it an enormous scaled-up box and bellows was constructed, and set upon a suitably substantial wheeled tripod.

Instead of a huge piece of film or some unobtainable giant electronic sensor, the image is projected onto a large screen at the rear of the camera. A modern digital camera is mounted inside the box just beneath the lens and photographs the screen, resulting in the feel of the largest of large format cameras with the convenience of a digital format. The resulting images have a special quality to them that recalls pictures from the past, and definitely makes the camera a special if slightly inconvenient device.

This may be one of the larger cameras we’ve featured, but it’s not the first that uses a similar technique. 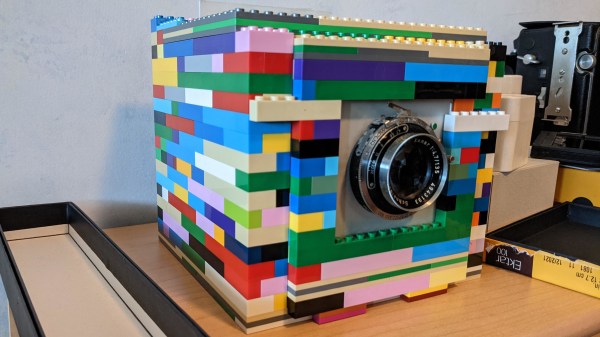 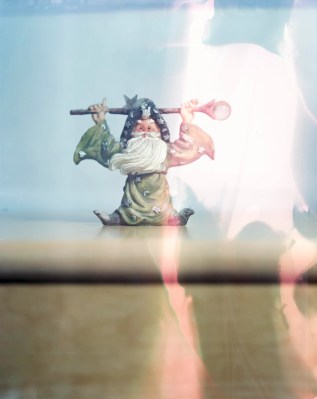 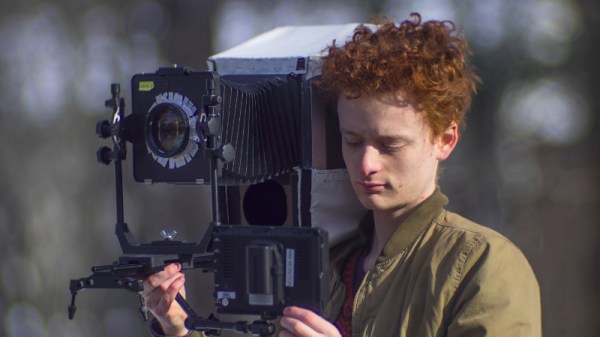 Large format photography gives a special quality to the images it produces, due to the differences in depth of field and resolution between it and its more modern handheld equivalents. Projecting an image the size of a dinner plate rather than a postage stamp has a few drawbacks though when it comes to digital photography, sensor manufacturersdo not manufacture consumer products at that size.

[Zev Hoover] has created a large format digital camera, and is using it not only for still images but for video. And it’s an interesting device, for the way he’s translated a huge large-format image into a relatively small sensor in a modern SLR. He’s projecting the image from the large-format lens and bellows onto a screen made from an artist’s palette, a conveniently available piece of bright white plastic, and capturing that image with his SLR mounted beneath the large-format lens assembly. This would normally cause a perspective distortion, but to correct that he’s mounted his SLR lens at an offset.

He does point out that since less light reaches the camera there is also a change in the ISO setting on the camera, but once that has been taken into account it performs satisfactorily. The result is a camera that allows something rather unusual, for Victorian-style large-format images to come to life as video. He demonstrates it in the video below, complete with friends in suitably old-fashioned looking steampunk attire.

END_OF_DOCUMENT_TOKEN_TO_BE_REPLACED

After 20 or so years of development, digital cameras may soon be superior to film in almost every way, but there are a few niches where film cameras reign supreme. Large format cameras, for example, are able to produce amazing images, but short of renting one for thousands of dollars a day, you’ll probably never get your hands on one. For his entry to The Hackaday Prize, [Jimmy.c..alzen] decided to build a digital large format camera, using an interesting device you don’t see used very often these days – a linear CCD.

[Jimmy]’s camera is built around a TAOS TS1412S, a linear CCD that is able to capture a line of light 1536 pixels across. The analog values are clocked out from this chip in sequence, going straight into an Arduino Due for processing, saving, and displaying on a small screen.

Inside the camera, the sensor is on a pair of rails and driven across the focal plane with the help of a stepper motor. The effect is something like the flatbed scanner to camera conversions we’ve seen in the past, but [Jimmy] is able to adjust the exposure of the camera simply by changing the integration time of the sensor. He can also change the delay between scanning each column of pixels, making for some really cool long-exposure photography techniques; one side of an image could be captured at noon, while the other side could be from a beautiful sunset. That’s something you just can’t do otherwise without significant digital manipulation outside the camera.