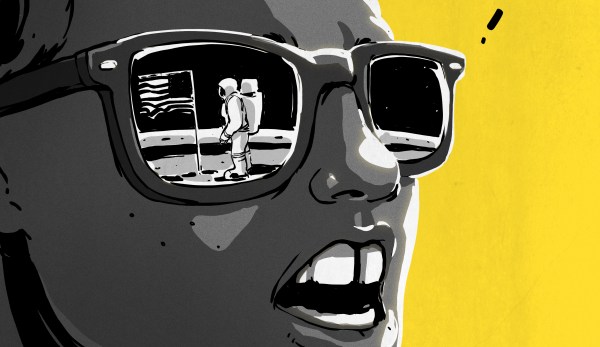 This month will mark the 50th anniversary of the Apollo 11 mission that brought to a successful conclusion the challenge laid down by President Kennedy only eight years earlier. Three men went to the Moon, two walked on it, and they all came back safely, in a dramatic eight-day display of engineering and scientific prowess that was televised live to the world.

If you’ve made more than 50 trips around the sun, chances are good that you have some kind of memories of the first Moon landing. An anniversary like this is a good time to take stock of those memories, especially for something like Apollo, which very likely struck a chord in many of those that witnessed it and launched them on careers in science and engineering. We suspect that a fair number of Hackaday readers are in that group, and so we want to ask you: What are your memories of Apollo?

My memory of the Moon landing is admittedly vague. I had just turned five the month before, hadn’t even started kindergarten yet, but I had already caught the space bug in a big way. I lived and breathed the space program, and I knew everything about the Mercury missions that were over by the time I was born, and the Gemini missions that had just wrapped up. Apollo was incredibly exciting to me, and I was pumped to witness the landing in the way that only a five-year-old can be.
END_OF_DOCUMENT_TOKEN_TO_BE_REPLACED