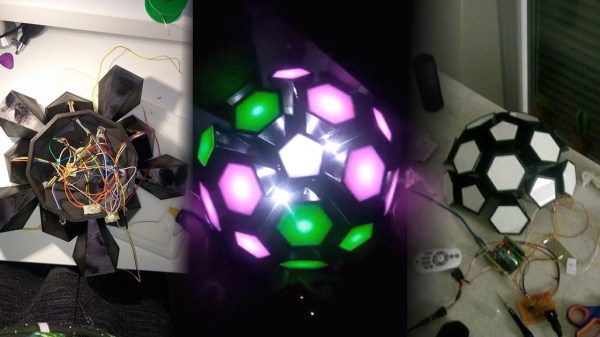 MIDI instruments and controllers are fun devices if you want to combine your interest in music and electronics in a single project. Breaking music down into standardized, digital signals can technically turn anything with a button or a sensor into a musical instrument or effect pedal. On the other hand, the receiving end of the MIDI signal is mostly overlooked.

[FuseBerry], a music connoisseur with a background in electronics and computer science, always wanted to build a custom MIDI device, but instead of an instrument, he ended up with a MIDI controlled light show in the shape of an exploded truncated icosahedron ([FuseBerry]’s effort to look up that name shouldn’t go unnoticed). He designed and 3D-printed all the individual geometric shapes, and painstakingly equipped them with LEDs from a WS2818B strip. An Arduino Uno controls those LEDS, and receives the MIDI signals through a regular 5-pin DIN MIDI connector that is attached to the Arduino’s UART interface.

The LEDs are mapped to pre-defined MIDI notes, so whenever one of them is played, and their NoteOn message is received, the LEDs light up accordingly. [FuseBerry] uses his go-to DAW to create the light patterns, but any software / device that can send MIDI messages should do the trick. In the project’s current state, the light pattern needs to be created manually, but with some adjustments to the Arduino code, that could be more automated, something along the lines of this MIDI controlled Christmas light show.

END_OF_DOCUMENT_TOKEN_TO_BE_REPLACED

Using an MSA-T MIDI Decoder from Highly Liquid, [Rob Darman] was able to take the MIDI output of his Roland V-Drums and use that output to control fire shooting cannons, forming a setup that he calls fire drums. As seen in the video above, the response time between the V-Drums and the fire drums is pretty impressive. While this is by far one of the coolest things that we’ve seen controlled by MIDI, we’re naturally thinking about taking this to the next level; MIDI-controlled fireworks, anyone?

You may remember the MSA decoder devices from people wiring up MIDI drums to Rock Band.