Maxim’s iButtons, which are small ICs in button-sized disks, are starting to show up in more and more places. They have a range of uses, from temperature loggers to identification, and all use the 1-wire protocol to communicate. Over a furrtek, they hacked an iButton used for buying things from vending machines and created an infinite money cheat. They built a small rig based on the ATmega8 to read and write data to the chip. The data was encrypted, so it wasn’t feasible to put an arbitrary amount on the card. Instead, they used a similar technique to the Boston subway hack and restored a previous state to the iButton after something was bought. They also created a hand-held device to backup and restore the contents of a button for portable hacking.

Using an MSA-T MIDI Decoder from Highly Liquid, [Rob Darman] was able to take the MIDI output of his Roland V-Drums and use that output to control fire shooting cannons, forming a setup that he calls fire drums. As seen in the video above, the response time between the V-Drums and the fire drums is pretty impressive. While this is by far one of the coolest things that we’ve seen controlled by MIDI, we’re naturally thinking about taking this to the next level; MIDI-controlled fireworks, anyone?

You may remember the MSA decoder devices from people wiring up MIDI drums to Rock Band.

It seems that our french friends over at BlogEEE.net have gotten their hands on a prototype of the Asus EEE Keyboard all-in-one keyboard computer. After plugging it in and messing around it a little bit, they decided to take it apart. Although BlogEEE.net is in French, we were able to learn several things about this prototype. According to the site, the PCB in their EEE keyboard is marked as Revision 1, meaning that it is very possible that this could be the finalized version of the PCB that will be seen in retail units. Also, they mention the presence of a Silicon Image sil1392cnu, a chip responsible for sending HD graphics via the EEE’s onboard HDMI port, supporting resolutions anywhere from 480i to 1080p. Perhaps one of the most impressing details uncovered was that when weighed the EEE keyboard clocked in at an impressive 2.1 pounds, lighter than most keyboards that don’t have an onboard CPU or display. While we’ve learned a lot about the Asus EEE Keyboard so far, there is still no information available regarding its release date. 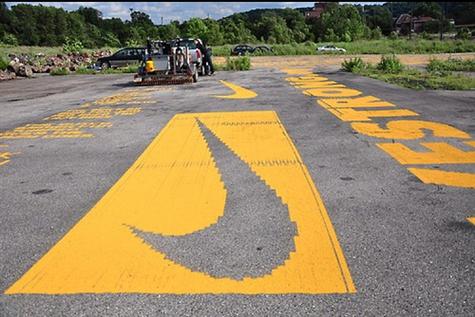 For those who watched the Tour de France, you may have been pleasantly surprised to see some cool tech. Nike was using a robot to paint pictures on the street in chalk dot matrix style. It was accepted by the general public as new and innovative, as well as generally cool. In the hacker community though, a bit of trouble began to brew. The Chalkbot bears more than a passing resemblance to a project called GraffitiWriter. GraffitiWriter was a bot initially designed to protest the militarization of robotics. As it turns out, one of the early developers of the GraffitiWriter is behind the Chalkbot in a legitimate contract. The trouble doesn’t seem to be one of intellectual property legalities. People are mad at the corporatization of public work. They want kids watching to know that this system was designed by regular people in their spare time at their homes, not by a team of researches in a secret underground Nike laboratory.

The article takes a bit of a turn and talks some about the possibility of projects being taken and used for corporate advertisement. The specific item they are talking about is the Image Fulgurator which secretly projects images on objects in your photographs. You’ll have to go check that one out to see how it works.

Some companies insist on using proprietary pieces. It can be really frustrating when there is no apparent reason other than consumer lock in. It irritates us to feel like we’re being forced to buy their pieces. This is one of the more popular reasons listed when you ask a hacker or modder what got them started.  This project takes us through making a normal power supply work with the compaq proprietary 14 pin plug found in some smaller desktop PCs.

Aside from the plug itself being different, the motherboards require a 3.3v standby voltage. A normal power supply usually only has a 5v. Though there are even simpler ways of bypassing the issue, he chose to put an inline voltage regulator. Schematics are available on the site.