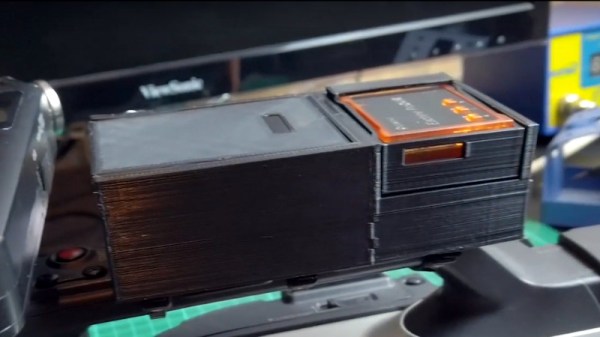 We’re lucky to live in an age of rapid technological advancement, lucky in more ways than one because as well as receiving a constant supply of new things, we have the benefit of the older tech that once we lusted over, at knock-down prices. [Luke Baker] spent his youth as a skateboarder, and the cameras of desire in that community were the high-end MiniDV models. They may not have high definition but their output has a Millennial aesthetic that captures the period, so he’s brought one into the 2020s by adding a digital SD card recorder designed for a multirotor to it.

On the face of it this is a pretty straightforward job of coupling an off-the-shelf recorder to a battery and the camera’s analogue output terminals. But the resulting spaghetti on what is supposed to be a portable device is hardly attractive, so he’s created an all-in-one 3D-printed enclosure that is attached to the camera’s handle with a set of cable ties. It’s shaped to fit the recorder and has a sliding lid over the battery compartment, and he’s added a handy on-off switch. Whether or not he takes it to the skate park in a bid to roll back the decades, as you can see int he video below the break it’s a well-executed piece of work that should serve to remind that there’s still life in some of this easily-available old tech if you’re prepared for a bit of lateral thinking.

This isn’t the first vintage video hack we’ve seen, back in 2016 we were treated to the grainy period feel of a vintage 8mm camera through the eye of a Raspberry Pi.