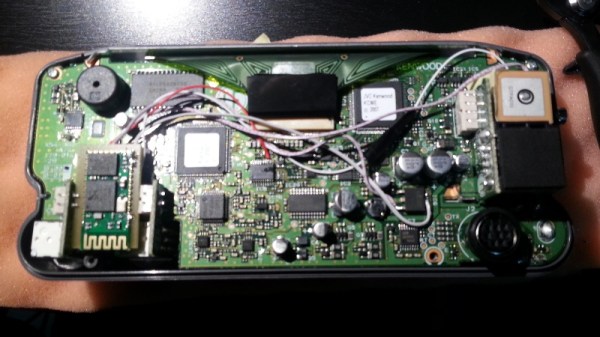 While [Selim Olcer] was relatively happy with his Kenwood TM-D710a radio, he didn’t like the fact that it needed a bulky external GPS “backpack” for APRS location data. So he decided to crack open the head unit and see if he couldn’t integrate his own GPS hardware (machine translation). Not only did he succeed, but he even threw in Bluetooth compatibility for good measure. 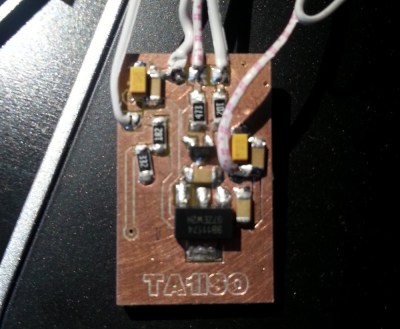 With the repair manual circuit diagrams in hand, it was no problem to find the GPS RX and TX lines that were being broken out to the external connector. Unfortunately, the radio’s electronics are all 5 volts and the GPS module [Selim] wanted to use was only 3.3 V. So he came up with a small PCB that included not only the voltage regulator to power the GPS module, but also some voltage-dividers to level shift those signals.

Since the Kenwood TM-D710a was already designed to accept a GPS upgrade module, he just needed to change some configuration options in the radio’s menus for it to see the new hardware. Technically the project was done at this point, but since there was still room in the case and he had a GPS module spitting out NMEA sentences, [Selim] tacked on a common Bluetooth serial module so he could see the position information on his smartphone. With an application like APRSdroid, he now has a nice moving map display using the position pulled from the radio’s GPS.

With this modification done it looks like the head unit is ready to go, but that’s only the beginning for a mobile rig. Now we want to see how he integrates the whole thing into the car.

[Pete], a.k.a. [KD8TBW] wanted to install his Yaesu radio in his car. From experience, he knew that having a radio in a car inevitable led to leaving it on once in a while, and this time, he wanted a device that would turn his rig on and off when the key was in the ignition. He ended up building a mobile radio power converter. It takes the 12V from the car when the alternator is running, and shuts everything off when the engine has stopped.

The Yaesu radio in question – an FT-8800 does have an automatic power off feature, but this is a terrible way of doing things. There is no way to turn the radio back on, and the radio must be left in a non-scanning mode.

In what he hopes to be his last design in EagleCAD, [Pete] whipped up a board featuring an ATtiny85 that measures the voltage in the car; when it’s ~14V, the alternator is working, and the radio can be switched on. When it drops to ~12V, it’s time to turn the radio off. It’s a great project, and with the 3D printed case, it can easily be shoved inside the console. Video below.