Since we put out a call for model and amateur rocketry hacks, we’ve been getting a lot of submissions on our tip line. Here’s two that found their way to us yesterday:

Back in the early 70s, Estes released a rocket with an 8mm movie camera attached to the nose of the rocket. It was called the Estes Cineroc, and is an excellent demonstration of engineering prowess to fit a movie camera inside a cardboard tube. The Cineroc is somewhat of a collector’s item, so of course there’s a reproduction kit with a payload bay large enough for [Bob Marchese]’s 808 key fob video camera. His launch video looks awesome, has color, and doesn’t need to be mailed off to Estes to be developed.

Much better than a lightbulb and a button

Remember the old yellow (or blue, and I think maybe a red one) push-button launch controller? Equipped with an arming key (a piece of wire), batteries, and a button, that controller wasn’t much to write home about. [Joe Niven] built his own launch controller with multiple LED lights, buzzer, continuity checker, and a battery tester. Not bad for a 555 and a pair of 4000-series logic chips.

There’s nothing like the smell of black powder in the morning, along with the excitement and burnt propellant in the air that comes after launching a model rocket. All those 60s, 70s, 80s and 90s kids out there may remember the classes of model rocket engines – generally A, B, C, and D sized engines used to push your cardboard tube with balsa fins skyward.

A lot has changed in the world of model and amateur rocketry in the last few years. In 2009, the Tripoli Rocketry Association won a lawsuit against the Bureau of Alcohol, Tobacco, Firearms and Explosives to allow the sale of Ammonium perchlorate rocket engines to anyone. This lawsuit took almost 10 years to come to a head, but finally anyone can walk into Hobby Lobby and come out with D, E, F, and G engines in hand. Even our old favorite, Estes rockets, has gotten into the game by putting out a few awesome G-powered kits. With these off-the-shelf motors, anyone (in the US, at least) can launch a G-powered model rocket weighing under 1500 grams (3.3 lbs) without the need for a certification.

With that in mind, we’re putting out a call for model rocket hacks. If you put together an microcontroller-powered altimeter project, awesome. Send it in. On board video camera? Great! Even if you built a huge replica of the Titan IIIe (or the Estes Star Rider, a personal favorite), send that thing in. If you’re going for a huge Saturn V, the record to beat is a 1/10 scale model, so get on it. We love ballistic trajectories and the smell of black powder in the morning, so we’re really interested in the wireless rocket launch pad sent in by [Brent Strysko].

[Brent] used an ATmega with an enc28j60 ethernet shield and wireless router to launch the rocket without a physical connection with ‘the button.’ Everything on the launchpad is powered by a 12 Volt motorcycle battery, and there’s also a flashing LED for the countdown. All that’s needed to launch a rocket is to send a command from the laptop. We think this would be an awesome project when combined with the radio telemetry build we covered earlier – the computer is already there with the range safety officer.

Although amateur rocketry is extremely safe, with no high-power flight ever hitting a person (PDF warning), there’s still some risk of from black powder engines CATOing. We think [Brent] came up with a great way to make a safe hobby even safer, and managed an interesting project in the process. Check out the walkthrough of the launchpad after the break, or check out this video of the launchpad in action.

END_OF_DOCUMENT_TOKEN_TO_BE_REPLACED 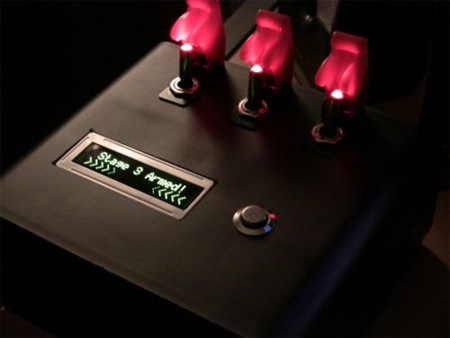 [Josef Jahn] has posted a detailed guide on building a microcontroller-based launch box. Constructed from an Atmel ATMega168 and powered by a 12V rechargable lead gel battery, the launch box is fully portable and includes a number of safety features. Going the extra mile on what could essentially be a simple push button launcher, he added three safety switches, a sixty second after-launch timer and a beautiful (not to mention rare) PLED display complete with dramatic status messages. Check out a video of the launcher in action after the break.