Scientists working to advance the frontier of knowledge frequently also need to invent their tools along the way. Sometimes these are interesting little hacks to get a job done. Recently some researchers found ancestors of moths and butterflies older than any previously known by analyzing tiny scales found alongside ancient pollen. They needed a tool to manipulate these scales: separating them from surrounding debris, transferring them to microscope slides. The special tool was a needle tipped with a single human nostril hair.

As ancient insects were the published paper‘s focus, their use of nose hair tipped needle was only given a brief mention in the “Materials and Methods” section. Interviews by press quoted researchers’ claim that nose hair has the right mechanical properties for the job, without further details. Not even a picture of the tool itself. What properties of insect scales made them a good match with the properties of nose hair? Was there a comprehensive evaluation of multiple types of hair for the task? Would we regret asking these questions?

Novel approaches to fine-tipped tools would be interesting to examine under other contexts, like the tweezers we use to build surface-mount electronics. As SMD parts continue to shrink in size, will we reach a point where hair-tipped tools are the best DIY alternative to an expensive pick-and-place machine? It would be another creative approach to deal with the challenges of hand-built SMD. From simple but effective mechanical helpers, to handy 3D printed tools, to building hybrid Manual + CNC pick-and-place more affordable than their fully automated counterparts. 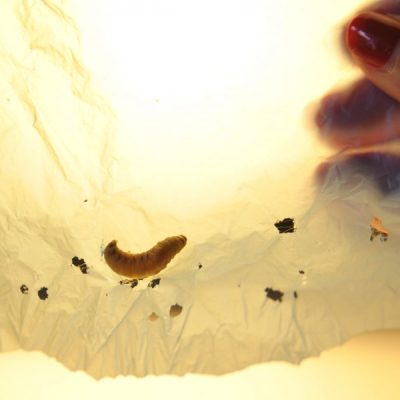