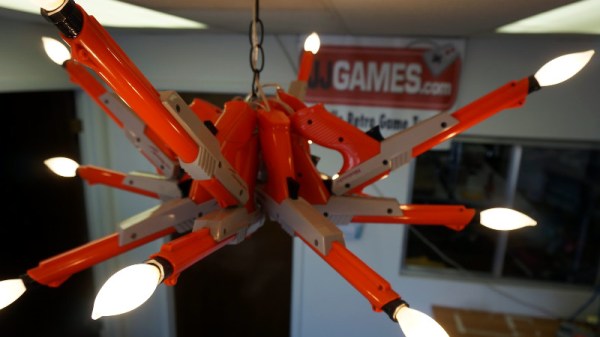 If there’s one thing our community is good at, it’s re-imagining redundant old hardware, particularly in the field of classic gaming consoles and their peripherals. Dead consoles have become new ones, Powergloves have ventured into virtual reality, and light guns, well, they’ve become novelty light fittings.

The [JJGames] Nintendo light gun chandelier will probably make collectors wince who prefer their retro hardware pristine, but it’s certainly an eye-catching conversation piece. The twelve guns are carefully disassembled and the Nintendo electronics removed, before a bulb holder and teardrop lamp is installed. Wiring is completed with twist caps,  the guns are joined at the grip with some metal strips and glue, and a chain for ceiling attachment completes the ensemble. A dozen pieces of ireplacable retro hardware sacrificed for a novelty, or a masterpiece of interior decoration? You decide, though we’d opt for the latter in the context of the retro games based business in which it sits.

Our favourite NES lightgun hack ever has to be [Seb Lee-Delisle]’s one that fires a real laser. Meanwhile [JJGames] have made it here before in a similarly wanton use of classic Nintendo plastic, with their urinal made from SNES cartridges.

If you fancy a go at circuit bending, where do you start? Perhaps you find a discarded musical toy at a junk sale and have a poke around, maybe you find the timing circuit and pull it a little to produce a pitch bend. Add a few wires, see what interesting things you can do connecting point A to point B, that kind of thing.

Many of us have spent an entertaining afternoon playing in this way, though it’s probable few of us have achieved much of note. [Russell Kramer] however must have persevered to become a circuit bender par excellence, as his latest project is one of the most accomplished circuit bending projects we’ve seen.

Zappotron Super Sequencer is an analog sequencer. Except that sentence simply doesn’t convey what it really is, it’s an analog sequencer with four sound sources: two tape decks, a 4046 oscillator, and a circuit-bent spelling tutor toy, and its sequencer component is controlled with a Nintendo light gun and a CRT screen.

You might be thinking that you could do all that with relative ease on a modern single board computer, but what makes this project so special is that he’s achieved it using only logic chips and diode logic gates, not a microprocessor in sight save for the one in the spelling toy. The build log goes through all the circuitry in detail, and we have to tell you it’s a work of art that demonstrated his mastery of both analog circuitry and digital logic.

To cap it all off he’s mounted it in a gloriously retro console, complete with retro embossed labeling. This is a high-quality item that we’d suggest you take a while to read about in detail. He’s posted a video demonstration if you’d like to see it in action, we’ve posted it below the break.