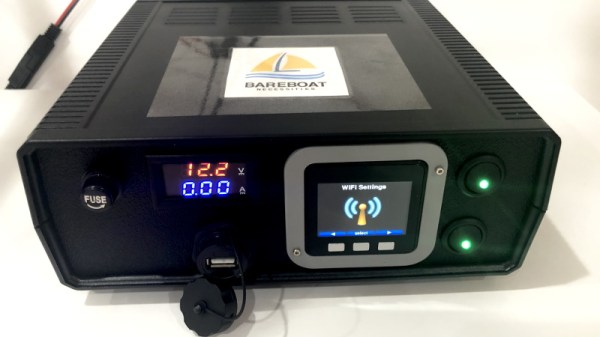 We’re not sure how many of you out there own a boat large enough to get its own integrated computer network, but it doesn’t really matter. Even if you can’t use this project personally, it’s impossible not to be impressed with the work [mgrouch] has put into the “Bareboat Necessities” project. From the construction of the hardware to the phenomenal documentation, there’s plenty that even landlubbers can learn from this project.

In its fully realized form, the onboard computer system includes several components that work together to provide a wealth of valuable information to the operator.

What [mgrouch] calls the “Boat Computer” contains a Raspberry Pi 4, a dAISy AIS receiver, an RTL-SDR, a GPS receiver, serial adapters, and the myriad of wires required to get them all talking to each other inside a weatherproof enclosure. As you might expect, this involves running all the connections through watertight panel mounts.

Combined with a suite of open source software tools, the “Boat Computer” is capable of interfacing with NMEA sensors and hardware, receive weather information directly from NOAA satellites, track ships, and of course plot your current position on a digital chart. The computer itself is designed to stay safely below deck, while the operator interacts with it through an Argonaut M7 waterproofed HDMI touch screen located in the cockpit.

For some people, that might be enough. But for those who want to do big, [mgrouch] further details the “Boat Gateway” device. This unit contains an LTE-equipped WiFi router running OpenWrt and all the external antennas required to turn the boat into a floating hotspot. Of course it also has RJ45 jacks to connect up to the other components of the onboard system, and it even includes an M5Stack Core with LAN module so it can display a select subset of sensor readings and navigational data.

If you’d like to do something similar on a slightly smaller scale, we’ve seen sailing computers that pushed all the data to a wearable display or even a repurposed eReader.