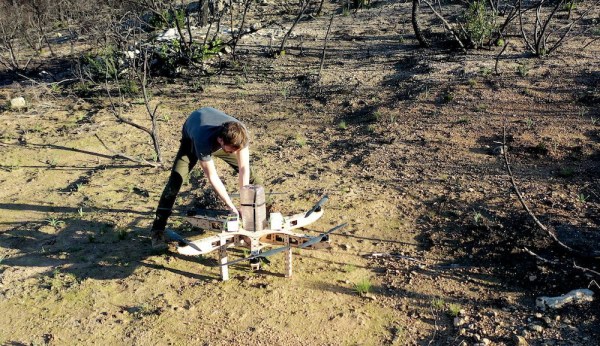 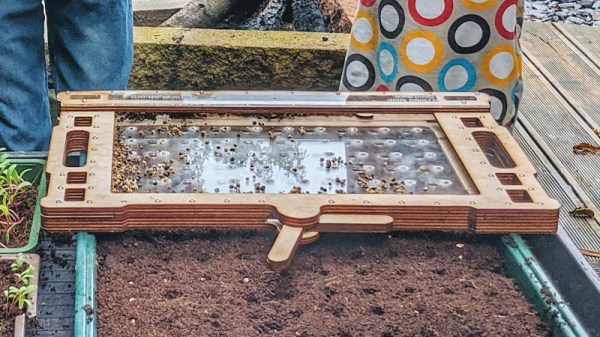 Anyone who has ever had to propagate small plants from seed will know that efficiently sowing seed can be a difficult process. Getting a consistent number of seed in each point while achieving any sort of speed is almost impossible, and as a result it becomes a tedious process. If only there were some means by which it could be automated, perhaps a way to do a whole tray at once!

Fortunately [Michael Ratcliffe] is at hand, with his tray-sized drop seeder. It consists of two sheets of acrylic each with a grid of holes, offset from each other by able to be brought into alignment with a lever. Seed is shaken over the upper surface until all the holes contain some, and then the lever is operated allowing it to drop through into the soil below. There is a matching dibber if required to push the required grid of holes in the soil.

It’s a simple yet ingenious gadget that genuinely will make the lives of horticulturalists a lot easier, even though it might not be perfect for all types of seed. He’s created a video which we’ve placed below the break, and should you wish to create the dibber we’ve already covered it.

END_OF_DOCUMENT_TOKEN_TO_BE_REPLACED

[Jethro Tull] is a name you may well associate with a 1970s prog/folk rock band featuring a flautist, but the original [Tull] was an inventor whose work you benefit from every day. He was a British lawyer and landowner who lived over the turn of the 18th century, and who invented among other things the mechanical seed drill.

Were [Tull] alive today he would no doubt be impressed by the work of [Akash Heimlich], who has created an exquisite vacuum seed placer for his rooftop hydroponic lettuce farm. Unlike the continuous rows of seed on the Berkshire earth of [Tull]’s farm, the lettuce seed must be placed in an even grid on a foam substrate for the hydroponic equivalent. This was an extremely tedious task when done by hand, so [Akash] set about automating the process with a vacuum seeder that is a thing of beauty.

It uses a simple yet effective mechanism involving a row of pipettes connected to a vacuum line, that are rotated over a vibrating hopper of seeds from which each one collects a single seed, before being rotated back over the foam where the seeds are dropped in a neat row through 3D-printed funnels. The foam is advanced, and the process is repeated until there is a neat grid of seeds. In only four minutes it can deliver 150 seeds, reducing several hours work into under half an hour.