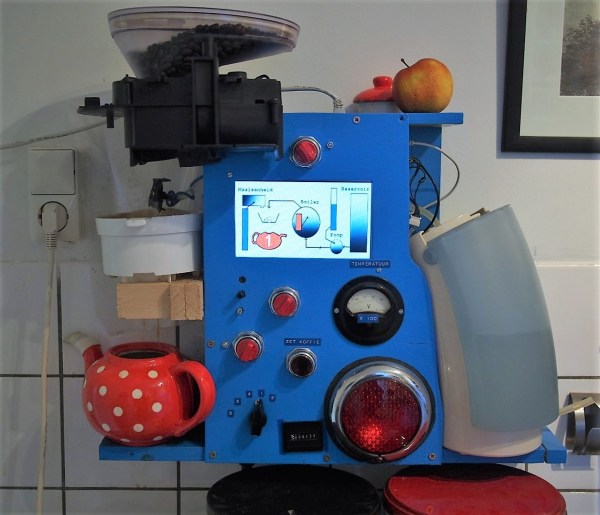 In Star Trek, there is a race of cyborgs with a drive to slowly assimilate all sentient life. Their aesthetic is not far off from the one [Ronald]’s ever expanding coffee machine is taking on. One has to wonder, what dark purpose would bring the Borg into existence? Where did they start? If [Ronald] doesn’t get a satisfying cup of coffee soon, we may find out.

We covered the first iteration of his brewing machine in 2013. We like to imagine that he’s spent many sleepless, heavily caffeinated days and nights since then to arrive at version 2. This version is a mechanical improvement over his original Rube Goldberg contraption. On top of that, it has improved electronics and code, with a color screen reminiscent of industrial control panels.

He’s also working on something called, “AutoBaristaScript(TM),” which attempts to hold the entire universe of pour-over coffee within its clutches. We don’t know when he’ll stop, but when he does finally create that perfect cup, what’s left of the world will breathe easier. They’ll also drink good coffee.

Editor’s Note: The Borg do not necessarily want to assimilate all sentient life as an end unto itself. The Kazon were deemed unworthy of assimilation (VOY: Mortal Coil). The Borg are driven towards perfection, accomplished by adding technological and biological distinctiveness to their own.