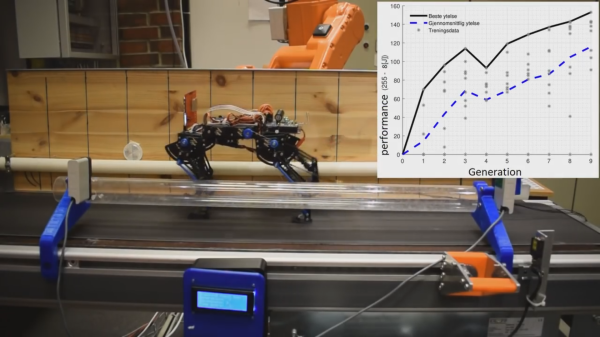 Most humans take a year to learn their first steps, and they are notoriously clumsy. [Hartvik Line] taught a robotic cat to walk [YouTube link] in less time, but this cat had a couple advantages over a pre-toddler. The first advantage was that it had four legs, while the second came from a machine learning technique called genetic algorithms that surpassed human fine-tuning in two hours. That’s a pretty good benchmark.

The robot itself is an impressive piece inspired by robots at EPFL, a research institute in Switzerland. All that Swiss engineering is not easy for one person to program, much less a student, but that is exactly what happened. “Nixie,” as she is called, is a part of a master thesis for [Hartvik] at the University of Stavanger in Norway. Machine learning efficiency outstripped human meddling very quickly, and it can even relearn to walk if the chassis is damaged.

We have been watching genetic algorithm programming for more than half of a decade, and Skynet hasn’t popped forth, however we have a robot kitty taking its first steps.

END_OF_DOCUMENT_TOKEN_TO_BE_REPLACED

Wheeled and tracked robots are easy mode, and thanks to some helpful online tutorials for inverse kinematics, building quadruped, hexapod, and octopod robots is getting easier and easier. [deshipu] came up with what is probably the simplest quadruped robot ever. It’s designed to be a walking robot that’s as cheap and as simple to build as possible.

The biggest problem with walking robots is simply the frame. Where a wheeled robot is basically a model car, a walking robot needs legs, joints, and a sturdy frame to attach everything to. While there are laser cut hexapod frames out there, [deshipu]’s Tote robot uses servos for most of the skeleton. The servos are connected to each other by servo horns and screws.

The electronics are based on an Arduino Pro Mini, with a PCB for turning the Arduino’s pins into servo headers. Other than that, a 1000uF cap keeps brownouts from happening, and a 1S LiPo cell provides the power.

Electronics are easy, and the inverse kinematics and walking algorithms aren’t. For that, [deshipu] has a few tutorials for these topics. It’s a very complete guide to building a quadruped robot, but it’s still a work in progress. That’s okay, because [deshipu] says it will probably remain a work in progress until every kid on Earth builds one.