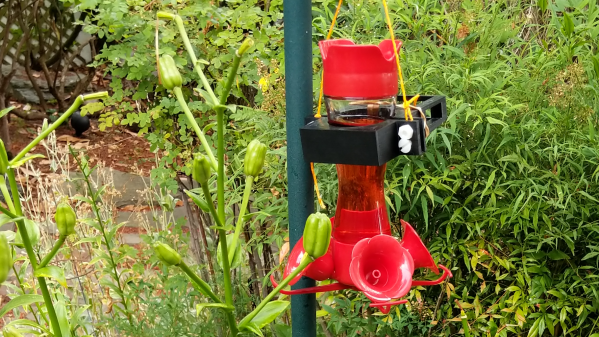 Setting camera traps in your garden to see what local wildlife is around is quite popular. But [Chris Lam] has just one subject in mind: the hummingbird. He devised a custom setup to capture the footage he wanted using some neat tech.

To attract the hummingbirds, [Chris] used an off-the-shelf feeder — no need to re-invent the wheel there. To obtain the closeup footage required, a 4K action cam was used. This was attached to the feeder with a 3D-printed mount that [Chris] designed.

When it came to detecting the presence of a hummingbird in the video, there were various approaches that could have been considered. On the hardware side, PIR and ultrasonic distance sensors are popular for projects of this kind, but [Chris] wanted a pure software solution. The commonly used motion detection libraries for this type of project might have fallen over here, since the whole feeder was swinging in the air on a string, so [Chris] opted for machine learning.

A RESNET architecture was used to run a classification on each frame, to determine if the image contained a hummingbird or not. The initial attempt was not greatly successful, but after cropping the image to a smaller area around the feeder, classification accuracy greatly increased. After a bit of FFmpeg magic, the selected snippets were concatenated to make one video containing all the interesting parts; you can see the result in the clip after the break.

It seems that machine learning and wildlife cams are a match made in heaven. We’ve already written about a proof-of-concept project which identifies different animals in the footage when motion is detected.