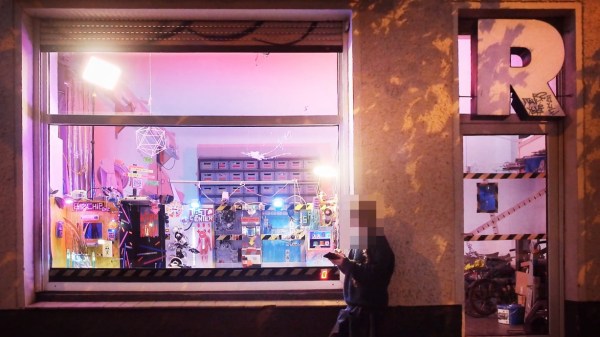 What’s this? Another fabulous creation from [Niklas Roy] and [Kati Hyyppä] that combines art and electronics with our zeitgeist and a lot of recycled bits and bobs? You got it. Their workshop in eastern Berlin used to be a retail shop and has a large display window as a result. This seems perfect for a pair of artists in a pandemic, because they can communicate with the community through the things they display in the window. Most recently, it was this interactive cyborg baby we are choosing to call Cybaby.

You might recognize Cybaby as one of the very hackable Robosapien robots, but with a baby doll head. (It also has a single red eye that really pulls its look together.) In the window, Cybaby comes alive and toddles around against a backdrop that grew and evolved over several weeks this spring and summer. Passersby were able to join the network and control Cybaby from outside with their smartphone to make it walk around, press various buttons that change its environment, and trigger a few sensors here and there. Robosapien has been around for about 20 years, so there is already Arduino code out there that essentially simulates its R/C signals. [Niklas] and [Kati] used a NodeMCU (ESP12-E) to send pulses to the IR input of the robot.

Back on the zany zeitgeist front, there’s a hair salon, a convenience store, and a nightclub for dancing that requires a successful trip through the testing center first (naturally). Oh, and there’s a lab next door to the nightclub that can’t be accessed by Cybaby no matter what it tries or how it cries. Check it out after the break.

There’s a dearth of Robosapien posts for some reason, so here’s what [Niklas] and [Kati] had in their window before the World of Cybaby — a really cool pen plotter that prints out messages sent by people walking by.

END_OF_DOCUMENT_TOKEN_TO_BE_REPLACED Our first thought was “check out all of those TO-92 components!”, but then we saw the wiring nightmare. [Tom] picked up a Robosapien from an estate sale for just $10. Most hackers couldn’t resist that opportunity, but the inexpensive acquisition led to a time-consuming repair odyssey. When something doesn’t work at all you crack it open to see what’s wrong. He was greeted with wiring whose insulation was flaking off.

This is no problem for anyone competent with a soldering iron. So [Tom] set to work clipping all the bad wire and replacing it with in-line splices. Voila, the little guy was dancing to his own tunes once again! But the success was short-lived as the next day the robot was unresponsive again. [Tom] plans to do some more work by completely replacing the wires as soon as he receives the replacement connectors he ordered. So what do you think, is this an issue that will be resolved with a wire-ectomy or might there be actual damage to the board itself?

Remember the coilosapien? I hopped over and found that [marcus] wrote a tutorial on his mini coil gun. He beefed up a disposable camera charging circuit with some extra capacitors to drive the coil, and used a small servo for his automatic reload mechanism. Everything you need to arm your robots.