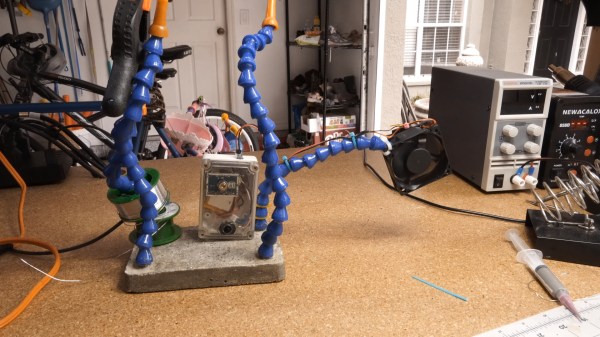 Even the most safety-conscious hackers among us might overlook protective gear when we’re just doing a quick bit of soldering. Honestly, though, eye protection is always a necessity. And those wisps of smoke, which drift so elegantly off the hot part of the iron, really shouldn’t drift directly into our nostrils. This is especially true if soldering you make a daily habit, or if you use lead-based solder.

And so, in defense of his lungs, [Jeremy S Cook] added a battery-powered fume extraction fan to his custom, concrete-based solder squid. Without proper power controls, though, the fan could easily drain its battery while no actual solder activity was occurring. To tackle that problem, he recently upgraded his system with a passive infrared (PIR) sensor to control when the fan turns on and off. The PIR sensor detects motion, enabling the fan only when it sees busy hands in its view, so he no longer needs to muck around with manual controls.

Despite a large increase in functionality, the design is relatively straightforward and uses off-the-shelf components, making it an accessible project for anyone who knows their way around an iron. [Jeremy] also upgraded his power source to a LiPo battery with onboard charger, which keeps the build light, maneuverable, and easy to get close to whatever he’s working on.

Whether you build or buy, a fume extractor will help fight off the famously face-seeking solder smoke on your workbench. Which is a good thing, too, because that smoke carries more than just the alluring aromas of making.

END_OF_DOCUMENT_TOKEN_TO_BE_REPLACED 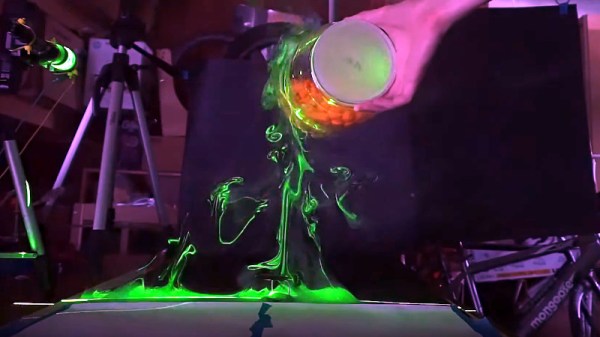 For some of us the smell of rosin soldering flux vaporizing from the tip of an iron as a project takes shape is as evocative as the scent of a rose on a summer’s day. We’ve certainly breathed enough of it over the years, as it invariably goes from the piece of work directly into the face of the person doing the soldering. This is something that has evidently troubled [AlphaPhoenix], who has gone to extravagant lengths to research the problem using planar laser illumination and a home-made (and possibly hazardous) smoke generator.

He starts with a variety of hypotheses with everything from a human-heat-driven air vortex to the Coandă effect, but draws a blank with each one as he models them using cardboard cut-outs and boxes as well as himself. Finally he has the light bulb moment and discovers that the key to the mystery lies in his arms coming across the bench to hold both iron and solder. They close off an area of lower-pressure dead space which draws the air current containing the smoke towards it, and straight into his face.  It’s something that can be combated with a small fan or perhaps a fume extractor, as despite some video trickery we have yet to master soldering iron telekinesis.