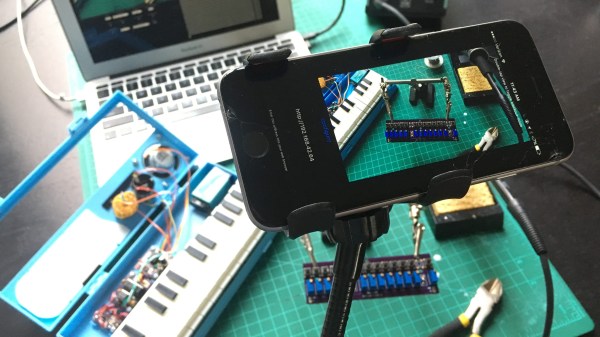 We’ve seen plenty of Arduinofied home brewing setups, and kegerators are a fairly standard project for the types of people we hang out with. What we haven’t seen a lot of are home stills. There are unfortunate reasons for this. First off, distilling alcohol is illegal in a few parts of the world if you don’t have a license or tax stamp. Second, vapors explode. Third, wood alcohol is poison.

That said, [TegwynTwmffat’s] project for the Hackaday Prize is the coolest and the safest alcohol still we’ve ever seen. It’s fully automated, small, safe, and there are video game noises sprinkled about the user interface.

The boiler for this nano still is constructed out of a keg, but that was just the starting point. [Tegwyn] removed the bottom of the keg, installed a new bottom, and coupled that bottom to a hot plate. The top of the keg was modified to accept a 2 inch brass fitting that was beautifully welded into place. From the boiler, the alcohol vapor goes into an air-cooled condenser, and all this equipment is housed in a welded steel frame. You couldn’t make something out of aluminum extrusion that looks this good.

The electronics include a hydrometer, an electronic alcohol vapor sensor, several temperature sensors an Arduino Mega, and a GPRS module for controlling the entire setup over the Internet. At various points in the distillation process, the Arduino plays audio files of a robot voice saying what’s going on in the still.

Right now, [Tegwyn] is distilling barley wine and cider into alcohol. The volume produced isn’t much — the keg is only 10 liters, after all — but this is one of the best stills we’ve ever seen. You can check out a video of [Tegwyn] walking us through the project below.