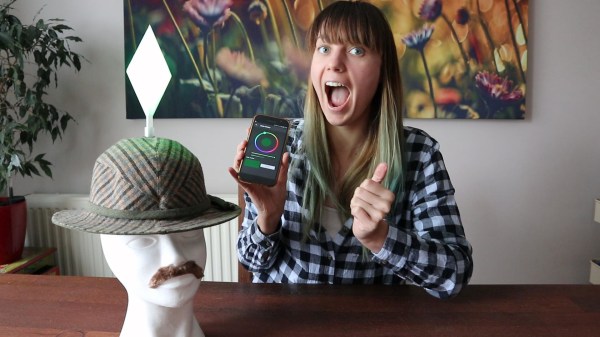 While there are a lot of objects from the Sims that we wish were real, we probably wish more than anything that everyone had a mood indicator hovering above their heads at all times. It would make working from home go a lot more smoothly, for instance. [8BitsAndAByte] made this Bluetooth-controlled plumb bob as part of their Sims Halloween costume, but we think it has real day-to-day value as this pandemic wears on, either as a mood ring or a portable free/busy indicator.

The hardware is about as simple as it gets — an Adafruit Feather nRF52 Bluefruit controls a pair of NeoPixel rings, one for each half of the translucent 3D-printed plumb bob. Power comes from a 500mAh battery, and all the electronics are situated inside of an attractive hat. Check out the build video after the break.

There’s more than one way to use color to convey information. This seven-segment temperature display does it with thermochromic film.

END_OF_DOCUMENT_TOKEN_TO_BE_REPLACED

Stop what you’re doing and dust off that 3D Printer, you’re going to want this headgear for your next party. [Daniel Harari] has created the perfect start of a phenomenal The Sims costume with this Bluetooth-enabled plumb bob.

The iconic crystalline shape will be familiar to anyone ever exposed to the game. It served as a handle and indicator for each virtual character in the popular life-simulation video game. On a short build deadline (a party), [Daniel] found a model of the shape he wanted on Thingiverse. He printed it in translucent green PLA so that LEDs inside would make it glow.

A headband and an aluminum pipe connect this to the wearer. Inside the printed enclosure is a an intricately packaged set of electronics that include an Arduino pro mini, low-side transistors to control six RGB LEDs, and an HC-05 Bluetooth module to connect to his phone. Batteries were mounted on the side of the pipe but we bet a bit of head scratching could re-imaging the battery type and get it inside the enclosure as well.

[Daniel] muses about adding brainwave sensing to control the LEDs. For this build he didn’t even need to write an app; he was able to get an already available color-picker to work. We’d like to see this combined with sentiment; a concept starting to gain popularity which samples social media and ascertains mood to change the display base what is found.

You realize what’s missing from his writeup? We couldn’t find any pictures of him wearing the thing!