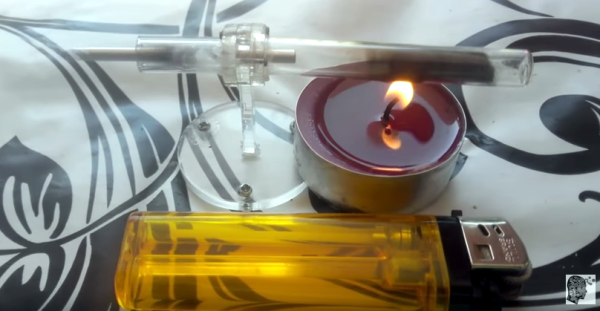 Modern internal combustion engines have around 500 parts, with many of them moving in concert with the piston. But have you seen an engine with only one moving part, out of four in total? In the thermoacoustic engine, the power piston is the only part in motion. [YTEngineer] has built a very simple prototype that works on power provided by a tealight.

His little engine, slightly larger than a cigarette lighter, is composed of a test tube that serves as the cylinder, a smaller tube, called the choke, that fits inside the test tube, the stack, which is nothing more than some steel wool, and the power piston. [YTEnginer] nicely explains how the engine works: basically a temperature difference is used to induce high-amplitude sound waves that create the piston’s back-and-forth movement. The engine can be easily converted to an electricity generator by adding a magnet to the piston and a coil surrounding it.

The thermoacoustic engine is a particular type of Stirling engine. They have been proposed as electricity generators for space travel using radioisotopes as the heat source, among other applications. You may be interested in the history of Stirling engines, or perhaps even build a simple one.