Here’s two builds that print text to a TV with only two pins:

Still Alive with an Arduino

After seeing all the builds that play Still Alive, [Bob] decided to take a 1972 amber monitor and recreate the cut scene at the end of Portal. The build uses the TVout library for Arduino. There were a few problems with running the Unix and Still Alive animations at the same time, so [Bob] flips a bit in the EEPROM at the end of the command line animation and restarts into GLaDOS’ report. You can check out the old school color monitor here

[Stian] didn’t think his build was good enough for Hackaday, but his friend [Mikael] thought otherwise. [Stian] wrote a library to generate an NTSC video signal in real time. It’s a text-based build with 37×17 character resolution and only requires about 3kB of RAM. As a bonus, it only takes up two pins on [Stian]’s ATMega128.

You can check out the videos for both these builds after the break.

END_OF_DOCUMENT_TOKEN_TO_BE_REPLACED 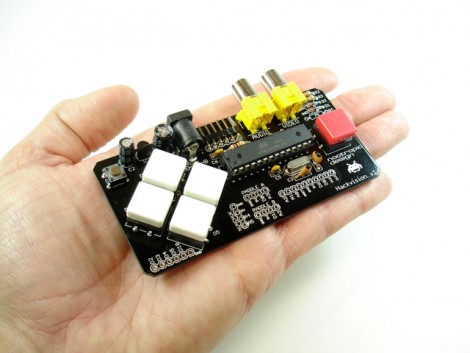 If you wanted to try your hand at programming some retro games Hackvision can jump-start the process. It is an Arduino-based game console in a controller format. You get four directional buttons and one function button. It has two RCA jacks for mono audio, and black and white video.

We’re happy to find that there’s information about game development that will help you follow along with the Space Invaders and Pong examples. The system uses the Arduino TVout library for video, which is robust and fairly easy to interact with. But once you see the game play in the video after the break it’ll be hard to resist building one of these. Don’t forget, this is Arduino based. If you already have an Arduino that uses an ATmega328 you just need to build the audio, video, and button circuits. END_OF_DOCUMENT_TOKEN_TO_BE_REPLACED