3D printers are very popular right now. We’ve seen them go from an interesting project to multiple commercial entities. Makerbot seems to be the poster child for the commercial side of things, at least they were. Their former COO [Samuel Cervantes] is now in charge of a new company called Solidoodle. Their main product is a complete 3d printing kit for $499. You supply power and a computer.

The Solidoodle is capable of building things 6″x6″x6″. The quality seems to be comparable to most of the others we’ve seen. They tout a .1mm layer thickness in HD mode (makerbot shows .2-.3mm). Not bad considering it is less than 1/3 the price of the makerbot replicator with a single extruder. The video after the shows it in action, as well as both with the optional case and door and without. END_OF_DOCUMENT_TOKEN_TO_BE_REPLACED

Ooooh, nice enclosure! This is a little motion sensing lamp which [Krazatchu] built a few years back as a Mother’s Day gift. The PIR sensor is easy enough to see as the white dome on the front of the case. But look closely below that and you’ll see the LDR which it uses to keep the thing asleep during the day. This is intended to save on batteries but the original version still ate through them like crazy. This year he gutted it and worked out a much more power-friendly design.

He moved to a TLC1079 OpAmp which greatly reduced power consumption when reading from the PIR sensor. The microcontroller was also upgraded from an ATtiny13 to an ATmega328, making the new version Arduino compatible. It puts itself to sleep and keeps the lights out during the day, drawing just 0.08 mA. When driving the RGB LED the lamp pulls about 50 mA. That should still last a while on three AA batteries but we’d still recommend using rechargeables.

END_OF_DOCUMENT_TOKEN_TO_BE_REPLACED Here are the contronl modules for a sous-vide project over at Nerdkits. [Humberto] and crew continue doing a great job of focusing a project on one goal, then explaining the steps needed to get there. In this case they wanted to build their own sous-vide appliance that was cheap, and didn’t really require the user to deal with mains voltage. We like it because most of the parts can be found at a hardware store and big box store.

He started with a slow cooker, which is pretty standard. Next he needed a way to switch power to the device. Instead of using a solid state relay, he went for a standard dimmer switch. It’s build into a double gang electrical box, and controls an outlet which is occupying the second position in that box. Now current to the slow cooker is limited by the position of the dimmer. The next task was to add a cardboard frame which marries a servo motor to the dimmer’s knob.

With the control scheme in place [Humberto] needed a feedback sensor. He built his own water proof temperature probe by covering an LM34 temperature sensor with shrink tube and sealing the ends. Just one probe in the cooking water isn’t very reliable so he added a second between the slow cooker’s base and ceramic vessel to improve the performace of the PID algorithm. He goes into detail about that in the video after the break.

END_OF_DOCUMENT_TOKEN_TO_BE_REPLACED [Rob Morris] has been hard at working improving his guitar augmentation techniques. Here he’s demonstrating the use of an iPhone to control the effects while he plays. This builds on the work he shared a few years ago where he strapped a Wii remote to the body of his ax.

Just like the Wii remote, the iPhone includes an accelerometer. As you would expect the best parts of the older hack made it into this one, but the inclusion of the touch screen adds a lot more. In the clip after the break he starts by showing off the screen controlling a whammy bar functionality. But we really love the octave offset feature that comes next. This kind of sound manipulation simply can’t be done using a purely physical method (like the whammy bar can). But he’s not done yet. The demo finishes with a Theremin feature. You’ll notice he plucks a string but no sound comes out until he starts touching the screen. This turns it into an entirely different type of instrument.

The only info we have about putting this together is the list of packages he’s using:  TouchOSC, Max/Msp, and GuitarRig

END_OF_DOCUMENT_TOKEN_TO_BE_REPLACED 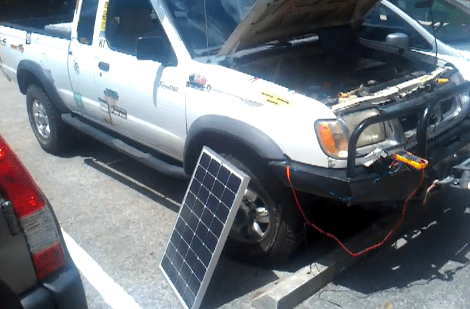 [Bryan] got his hands on a solar panel and decided to take it on the road rather than throwing it on the roof of the house. On sunny days it will top off the car battery, letting him use his stereo in the middle of nowhere without needing to keep the engine running. Instead of buying a ready-made solution he chose to design and build his own charging circuitry.

The charger uses an Arduino, which draws its own power from the panel via a regulator. It senses the voltage level of the battery and the available juice from the panel, connecting or disconnecting it from the electrical system as necessary. The system includes a set of LED indicators, which he installed in the dashboard near the cigarette lighter. This also gave him an excuse to install a voltmeter which uses a 2.5 digit seven segment display to read out the battery voltage. You can see a brief overview after the break.

END_OF_DOCUMENT_TOKEN_TO_BE_REPLACED