Building a video projector isn’t something that most people do casually, but [Dominic Buchstaller] isn’t most people. As part of an ongoing street art  project, he built a rather neat scrap video projector/bedside lamp/clock device he calls Great Balls of Fire. It is made from a Nokia cell phone screen and a small projector mechanism, mounted inside a frosted glass light sphere.

One of the most interesting parts of the build is the projector mechanism. Rather than build one from scratch or tear apart an expensive Pico projector, [Dominic] found another source: a cheap car logo projector from eBay. These are designed to show a car manufacturer logo on the ground when you open your car door. It came with all of the parts he needed, including an LED light source and optics. He tore that apart and replaced the car logo with the phone screen, creating a very cheap projector. It isn’t that bright, but it is bright enough that when he mounted it inside the glass sphere, it could project the time and the odd space invader. It’s a great example of how sometimes it makes sense to look for a cheap solution rather than a free one: buying the car logo projector saved him a lot of hassle in building the optics. [Dominic] was also responsible for this awesome old-school tube radio hack, where he replaced the guts of an old radio with an internet radio player.

END_OF_DOCUMENT_TOKEN_TO_BE_REPLACED 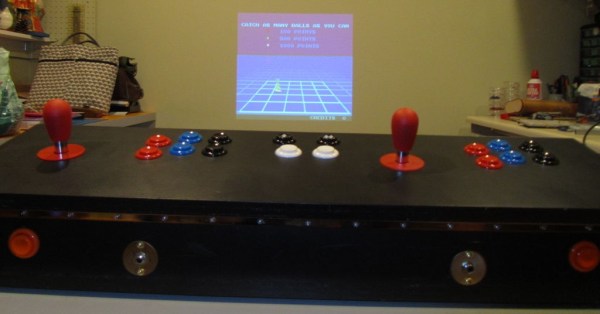 Video game enthusiast [NEIN] loves MAME. The one thing he doesn’t like much about MAME is moving large heavy MAME cabinets around. So what do you do if you want to take your games on the road? [NEIN] decided to come up with a portable MAME solution that includes everything all in one box so there is virtually no set-up time to get playing. He calls it ‘The MAMEFrame‘.

It may appear that this is a standard 2-player DIY controller, however, it is anything but. The display is housed inside the encloure — a video projector that connects to the Raspberry Pi via an HDMI cable. [NEIN] opted to use a Raspberry Pi instead of a large PC to help keep things light and samll. It’s almost like the two were made for each other. The projector has a built in battery and USB port. The Raspberry Pi is powered by the 5 volts supplied from the projector’s USB port making this unit completely portable and wireless. Just plop it down on a table, point it at a wall and you’re ready to guide Pac-Man to level 256!

Did you know one of the very first Raspberry Pi hacks ever was a MAME build?

END_OF_DOCUMENT_TOKEN_TO_BE_REPLACED Video projectors are great. They can easily produce a very large image to watch. With that large image comes a large screen, and who wants to look at a large screen when not watching TV? Well, [Steve] didn’t either so he set out to make a powered retractable screen for his projector. The best part about this one is that it is done in true DIY/hacker fashion. The parts used are definitely not intended to be used as anything close to a projector screen and the overall cost is kept to an absolute minimum.

END_OF_DOCUMENT_TOKEN_TO_BE_REPLACED

Apparently, there’s some sort of sporting event being televised this weekend that has been historically used as an excuse to buy a big-screen TV. [Joel] wanted a huge-screen TV on the cheap, so he converted an overhead projector to something he can use with his XBox.

Using a bare LCD panel with an overhead projector is a decades-old hack we’ve covered before. The basic idea is fairly simple, but we’ve never seen anything that could be considered a semi-permanent build. [Joel] started his project by picking up a surplus overhead projector for $25 and routing a cutting board to mount the LCD in. The bulb in the projector added a lot of heat, so three small fans are used to blow air between the projector glass and the LCD display.

[Joel] started off looking at the LumenLab DIY projector project, but considered that to be a terrible amount of work with a fairly high initial investment. If you don’t count the few LCDs [Joel] burned through while building his project, his projector was built for under $100. We’re loving the result and are sure it will be much appreciated at [Joel]’s LAN parties.