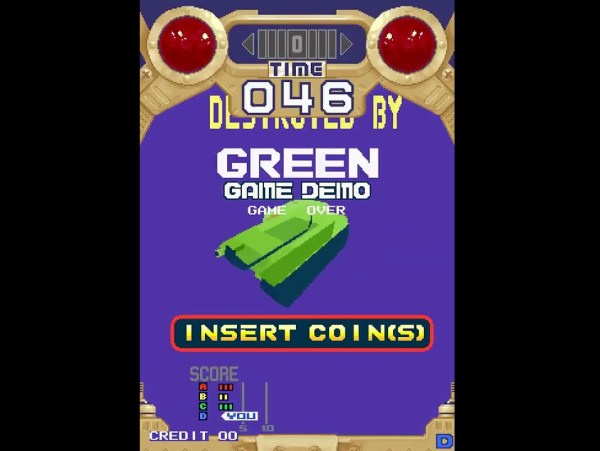 When fully-3D video games started arriving in the early 90s, some companies were more prepared for the change than others. Indeed, it would take nearly a decade of experimentation before 3D virtual spaces felt natural. Even then, Konami seems to have shot themselves in the foot at the beginning of this era with their first foray into 3D arcade games. [Mog] shows us the ins-and-outs of these platforms while trying to bring them back to life via MAME.

These arcade machines were among the first available with fully-3D environments, but compared to offerings from other companies are curiously underpowered, even for the time. They include only a single digital signal processor which is tasked with calculating all of the scene geometry while competing machines would use multiple DSP chips to do the same job. As a result the resolution and frame rate are very low. Nonetheless, [Mog] set out to get it working in MAME.

To accomplish this task, [Mog] turned to a set of development tools provided to developers for Konami in the early 90s which would emulate the system on the PCs of the time. It surprisingly still worked on Windows 10 with minor tweaking, and with some other tools provided over the decades of others working on MAME these old Konami machines have some new life with this emulator support.

Not everything works perfectly, but [Mog] reports that most of the bugs and other issues were recently worked out or are being actively worked on by other experts in the field. If you remember these games from the arcade era of the 80s and early 90s, it might be time to grab an old CRT and fire this one up again.

END_OF_DOCUMENT_TOKEN_TO_BE_REPLACED 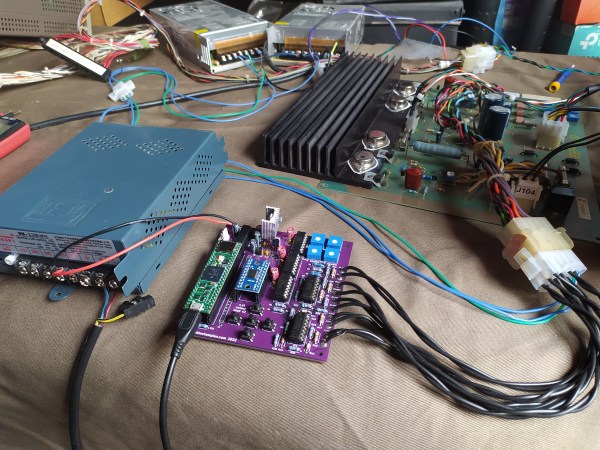 If you’ve been reading Hackaday long enough, you’ve probably come across a few hacks where someone made simple animations or even video games on an analog oscilloscope screen. Those hacks generally use vector graphics, where the cathode ray tube’s electron beam directly draws geometric shapes onto the screen. This gives the image a unique look that’s quite distinct from the pixel-based raster displays used on TVs and most computer monitors.

Vector displays were also used in several arcade machines of the early 1980s, including classics like Tempest, Gravitar and Star Wars. In order to emulate these games more faithfully than would be possible on a raster monitor, [Robin Champion] designed the vstcm: a color vector monitor controller to easily drive RGB vector monitors. 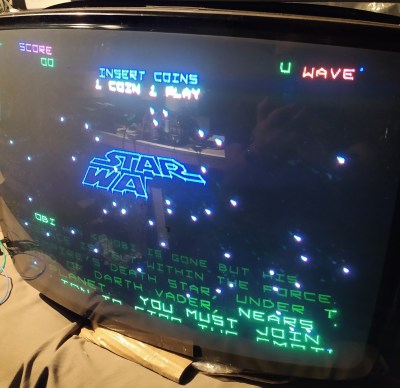 The design is based on [Trammell Hudson] and [Adelle Lin]’s v.st system, and therefore features a Teensy microcontroller as well as a couple of digital-to-analog converters. While the v.st can only connect to monochrome X/Y systems like oscilloscopes, the vstcm can work with RGB monitors to allow near-perfect emulation of color vector-based games. A custom software interface connects the vstcm to AdvanceMAME, a special version of the well-known arcade emulator that facilitates the connection of unusual display systems.

The end result definitely looks the part, although [Robin] notes that performance is not at the level it could be and requests those familiar with the Teensy platform to help optimize the code. If you’d like to build the vstcm but can’t find a vector monitor, you can always modify the yoke of a conventional CRT. Want to learn more about vector displays? Check out this thorough introduction. 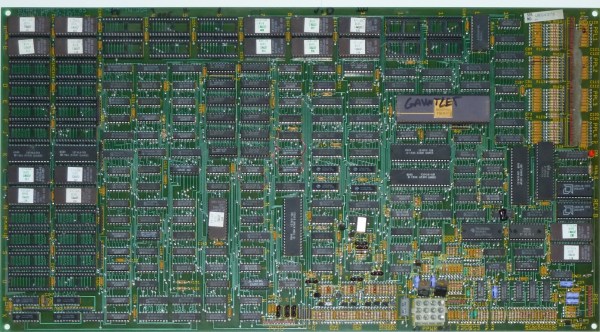 Gauntlet is a well-known arcade game from 1985 with many sequels and ports to more modern architectures such as Xbox and GameCube. Thanks to its popularity and relative age, the original arcade cabinet is well documented with the schematics available online. It was regarded as the most complex and ambitious hardware Atari had ever developed at the time it was released. In what can only be described as an absolute labor of love, [Alex] has recreated the arcade hardware on the Pipistrello FPGA board.

The project can actually play Gauntlet, Gauntlet II, and Vindicators II as they all ran on the same hardware. Four joysticks are supported so up to four players can play, though the EEPROM is emulated in RAM so high scores are reset when the device is powered down. The FPGA is almost out of space and can’t quite squeeze in the SRAM needed. So an SRAM expansion daughterboard is required; nothing a quick board run from our favorite purple PCB manufacturer can’t solve.

In the repo is an incredible write-up detailing the system, how it works, and the process of debugging it. This project also includes a complete simulation of the TMS5220 Voice Synthesis Processor, as Gauntlet was the first coin-operated arcade machine with a voice synthesizer. Getting the video correct was particularly tricky and it took several tries to get the color palette and motion looking right. Since [Alex] didn’t have access to an original Gauntlet arcade cabinet, they had to make do with MAME. After writing a test to make sure the FPGA was working correctly, there were differences between the MAME emulation and the FPGA output. To help out, [Colin Davies] came to the rescue. After [Colin] hooked up an original Gauntlet Arcade PCB with the motion test loaded up, the test showed that the FPGA had the correct behavior.

During development [Alex] actually simulated several frames of the game in ISIM (at a whopping 90 seconds per frame or 90 minutes per in-game second). Using ISIM allowed them to compare system state to MAME and validate the design much faster as they could better inspect the interworkings of the different modules. Using a clever trick of grabbing state from MAME after a few seconds, they primed the FPGA state and saved themselves a few hours of simulation.

If you’re looking to get into old hardware style arcade game development, give the browser-based 8bitworkshop IDE a spin. Or start with something a little smaller in scope and size with this adorable mini CRT arcade cabinet.

END_OF_DOCUMENT_TOKEN_TO_BE_REPLACED 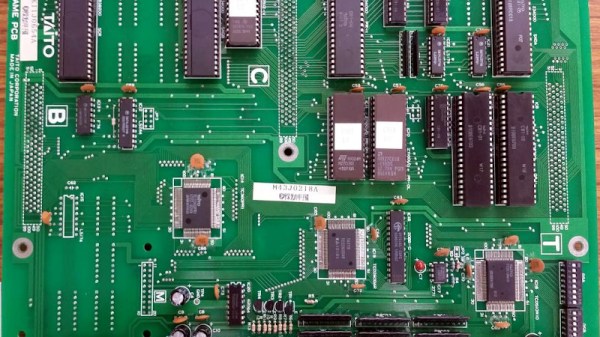 We’re used to games consoles in which the same hardware plays a variety of different games, but if we were to peer inside arcade cabinets of an older vintage we’d find custom boards unique to every game. Some boards from the same manufacturers shared common hardware traits even if they weren’t identical though, and [twistedsymphony] has taken advantage of this to make one vintage Taito game — Gun & Frontier — run on the hardware for another, Ah Eikou no Koshien. It’s a fascinating tale across a forum thread, that’s well worth a read even if you will never touch a vintage arcade board. 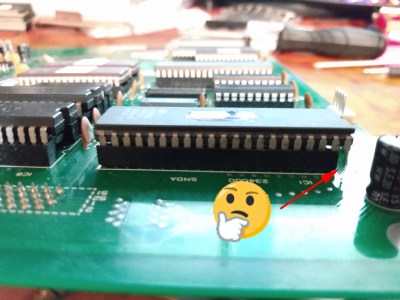 We might expect that the tool of choice would be a logic analyser or similar, but unexpectedly the solution to this hack was found in MAME. The arcade emulator conceals a wealth of information about these boards, from which you can discover their differences and try out possible solutions. The hardware hacks are surprisingly straightforward, a few bodge wires and an extra address line for a larger ROM. A programmable logic array required dumping and rewriting to fix a graphics corruption issue and a little bit of ROM tweaking after emulating a controller problem in MAME was required, but it seems that yes, one game can run on another. Certainly less painful than the Taito hack that required a chip to be decapped. 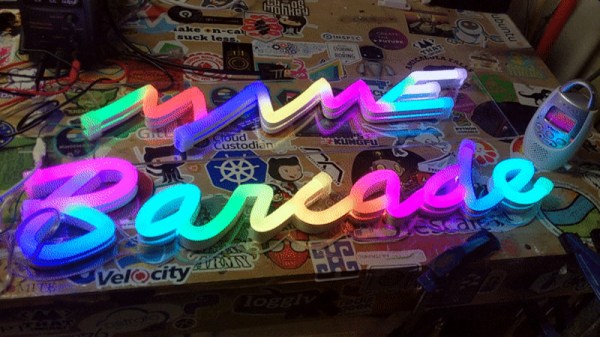 It’s a common sight in our community for a life-expired arcade cabinet to be repurposed as a MAME cabinet with an up-to-date screen and other internals. Many of us have had some fun pursuing high scores in a hackerspace somewhere, and even if they don’t have the screen burn and annoying need for cash of the originals they still deliver plenty of fun.

But if there’s one pleasure an adult can pursue that a kid in a 1980s arcade couldn’t, it’s a cool glass of beer. [Marcus Young] has brought together the two with his Barcaderator, a custom MAME cabinet with a beer tap on the side and a fridge for a keg in its base.

The MAME internals include a Lattepanda Alpha and an LED controller for those illuminated buttons. Where this build shines is in its custom cabinet, which instead of being an all-in-one unit takes the form of a base and top half that are detatchable. It appears to take its inspiration and build techniques from the world of flight cases. You can see the detail where the two halves come together in this image. The result should be of great interest to anyone who has struggled with moving an unwieldy traditional arcade cabinet.

This is we think the first beer/arcade combo to grace these pages. But we’ve had more than one arcade cabinet, and definitely quite a few kegs along the way. 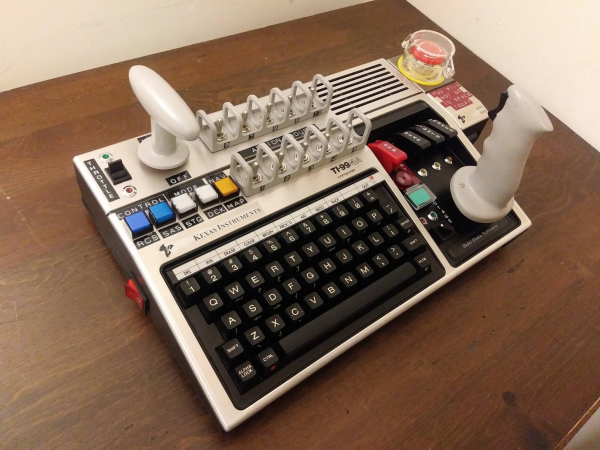 [MelkorsGreatestHits] had an extra USB MAME board burning a hole in his parts bin, so he turned it into fuel for this far-out Kerbal Space Program controller. Cool your jets — no fully-functioning TI-99/4As were harmed in the making of this baby. Besides, this is a KAL 9000 from Kexas Instruments. See the badges?

After donating the usable parts deemed unnecessary for space exploration, [MelkorsGreatestHits] had even more room inside the case for the throng of toggles that make this controller so touchable. We love the two tiers of toggles here — the important ones are separated with 3D-printed Space Shuttle-style switch guards, and the super-important toggles have flip-up covers to protect them from errant flicks of the hand. The vintage embosser labels are an impressive touch, and make us wish we had one that stamps vertically.

[MelkorsGreatestHits] modeled the combo throttle/roll handle and the joystick after the Apollo 11 command module controls. Unfortunately, the MAME board didn’t like his 3-axis analog joystick, so both are 2-axis and give WASD control. Good enough to get to the Mün!

We’ve seen more than a few KSP controllers around here, but none so overdone as this wonderful stand-up command station. 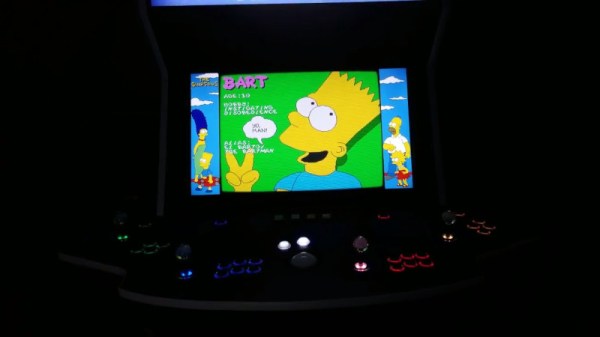 In this day and age of cheap and easy emulation, it’s more tempting than ever to undertake a home arcade cabinet build. If you want to show off, it’s got to have a light show to really pull the crowds in. To make that easier, [Patricio] put together a software package by the name of LEDSpicer.

The project came about when [Patricio] was working on his Linux-based MAME cabinet, and realised there were limited software options to control his Ultimarc LED board. As the existing solutions lacked features, it was time to get coding.

LEDSpicer runs on Linux only, and requires compilation, but that’s not a huge hurdle for the average MAME fanatic. It comes with a wide variety of animations, as well as tools for creating attract modes and managing LEDs during gameplay. There are even audio-reactive modes available for your gaming pleasure. It’s open source too, so it’s easy to tinker with if there’s something you’d like to add yourself.

It’s a great package that should help many arcade builders out there. LEDs can be used to great effect on a cabinet build; this marquee is a particularly good example. Video after the break.

[Thanks to Guillermo for the tip!]