Quadcopters show a world of promise, and not just in the mediums of advertising and flying Phantoms over very large crowds. They can also be used for useful things, and [Sagar]’s entry for The Hackaday Prize does just that. He’s developing a 3D mapping drone for farmers, miners, students, and anyone else who would like high-resolution 3D maps of their local terrain.

Most high-end mapping and photography work done with quadcopters these days uses heavy DSLRs to record the images that are brought back to the base station to be stitched into a 3D image. While this works, those GoPros are getting really, really good these days, and with 4k resolution, too. [Sagar] is mounting one of these to a custom quad and flying around an area to get images of an area from every angle.

To stitch the images together [Sagar] will be using the Pix4D mapping software, an impressive bit of software that will convert a multitude of still images to a 3D scene. It’s an expensive piece of software – $8500 for a perpetual license, but the software can be rented for $350/month until a FOSS alternative can be developed. 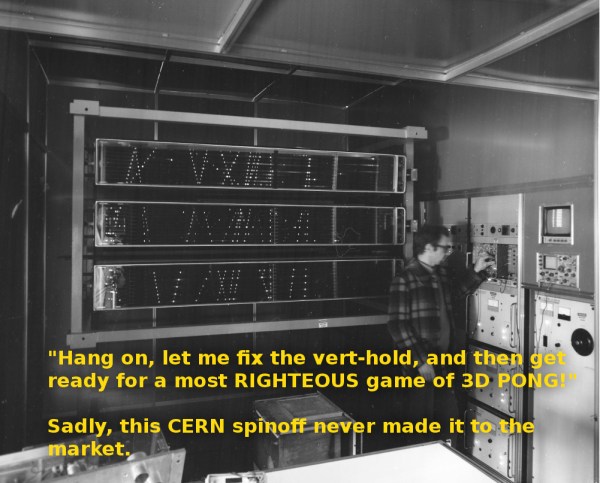 Week 16 of the Caption CERN Contest just flew by, but not without sparking some cosmic comic genius in the minds of everyone who wrote a comment. Thanks to everyone who entered! If you followed last week’s blog post, you already know that this image isn’t an early POV display, or some sort of strange data display technique. It’s actually a spark chamber. Spark chambers use high voltage and noble gases to create a visible trail of cosmic rays. Since this image is dated 1979, well after spark chambers were used for hard science, we’re guessing it was part of a demonstration at CERN’s labs.

After two weeks as a runner-up, this week’s winner is The Green Gentleman with “‘Hang on, let me fix the vert-hold, and then get ready for a most RIGHTEOUS game of 3D PONG!’ Sadly, this CERN spinoff never made it to the market” 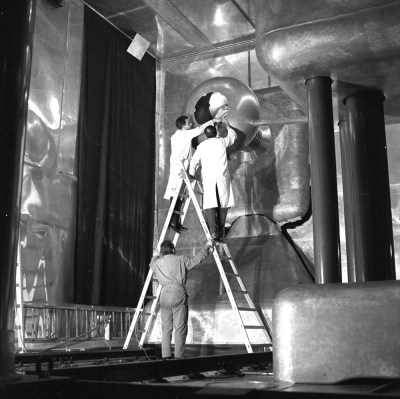 Coils, gleaming metal, giant domes, now this is a proper mad scientist image! The CERN scientists in this image seem to be working on a large metal device of some sort. It definitely looks like an electrode which would be at home either at CERN or the well equipped home lab of one Dr. Frankenstein’s. We don’t have a caption, but we do have a rough date of August, 1961. What is happening in this image? Are these scientists setting up an experiment, or plotting world domination?

This week we’re giving away a Logic Pirate from The Hackaday Store.

The economy is doing well, and that means companies are spending money. Companies in the chip business are in fact businesses, and spending money to them means acquisitions and mergers. The latest such deal is Avago Technologies buying Broadcom for $37 Billion USD – the largest deal ever made in the semiconductor industry.

The products made by these two companies aren’t usually found in stock at Adafruit, Sparkfun, or in the BOMs on Hackaday.io, but that doesn’t mean these chips aren’t extremely popular in the industry. Avago has a huge catalog of RF goodies and a surprising number of LED products. Broadcom, outside of the SoC found in the Raspberry Pi, likewise isn’t seen very often on workbenches, but their chips are found in everything from set-top boxes to Ethernet and broadband equipment.

Just a few months ago, a merger between NXP and Freescale struck a little bit closer to our hearts, but there is an opportunity for this acquisition to be much more interesting. The company that emerges from the NXP and Freescale merger will be saddled with hundreds of chip lines that all compete with each other – a cornucopia of ARMs, 8051s, Kinetis,  iMX.6, and ColdFires, and that’s just microcontrollers. Avago and Broadcom don’t have a catalog that overlaps nearly as much, and it will be very interesting to see what they can come up with.

Pushing your circuit boards around the bench while trying to solder the components is a fools game. Clamp that board in place with a Stickvise you won from Hackaday! This week we’ll choose 65 projects to receive one of these PCB clamps. You must submit your project as a Hackaday Prize entry to be eligible. Do it now and you’ll be considered for our weekly prizes all summer long — they total $50,000 that we’re putting into your hands.

We’re particularly proud of the Stickvise story. It was posted as a project on Hackaday.io and immediately caught our eye as an interesting idea. We worked with [Alex Rich] as he made his way through the process of getting it ready for manufacturing and it just became available in the Hackaday Store.

Regarding your entry to win one: find a problem facing your community and start a project that helps to solve it. We’ve seen many great entries so far, but with so many prizes your chances of winning are still really good! We recommend adding a project log each week that discusses your progress and perhaps mentions what you would use the Stickvise for while progressing toward a working prototype. Even if you don’t think your idea can win one of the big prizes, a great idea and solid write up is definitely a contender for our $50k in Play weekly prizes. Just look at the projects that won last week:

Congratulations to these 20 projects who were selected as winners from last week. You will receive a Bulbdial Clock Kit. It takes the concept of a sundial and recreates it using different colors of LEDs for each hand of the clock. This is our favorite soldering kit. It ventures a bit away from our mission of awarding tools and supplies to help with your entry, but sometimes you just need to have some fun!

Each project creator will find info on redeeming their prize as a message on Hackaday.io. 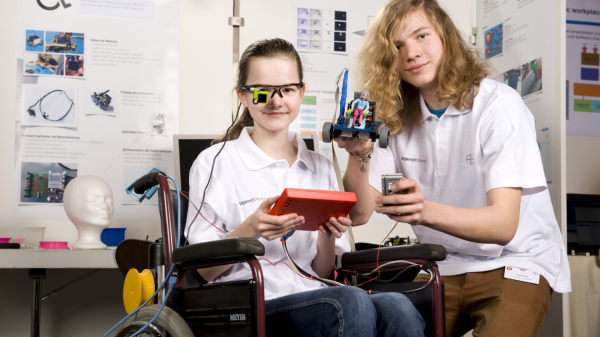 [Myrijam Stoetzer] and her friend [Paul Foltin], 14 and 15 years old kids from Duisburg, Germany are working on a eye movement controller wheel chair. They were inspired by the Eyewriter Project which we’ve been following for a long time. Eyewriter was built for Tony Quan a.k.a Tempt1 by his friends. In 2003, Tempt1 was diagnosed with the degenerative nerve disorder ALS  and is now fully paralyzed except for his eyes, but has been able to use the EyeWriter to continue his art.

This is their first big leap moving up from Lego Mindstorms. The eye tracker part consists of a safety glass frame, a regular webcam, and IR SMD LEDs. They removed the IR blocking filter from the webcam to make it work in all lighting conditions. The image processing is handled by an Odroid U3 – a compact, low cost ARM Quad Core SBC capable of running Ubuntu, Android, and other Linux OS systems. They initially tried the Raspberry Pi which managed to do just about 3fps, compared to 13~15fps from the Odroid. The code is written in Python and uses OpenCV libraries. They are learning Python on the go. An Arduino is used to control the motor via an H-bridge controller, and also to calibrate the eye tracker. Potentiometers connected to the Arduino’s analog ports allow adjusting the tracker to individual requirements.

The web cam video stream is filtered to obtain the pupil position, and this is compared to four presets for forward, reverse, left and right. The presets can be adjusted using the potentiometers. An enable switch, manually activated at present is used to ensure the wheel chair moves only when commanded. Their plan is to later replace this switch with tongue activation or maybe cheek muscle twitch detection.

First tests were on a small mockup robotic platform. After winning a local competition, they bought a second-hand wheel chair and started all over again. This time, they tried the Raspberry Pi 2 model B, and it was able to work at about 8~9fps. Not as well as the Odroid, but at half the cost, it seemed like a workable solution since their aim is to make it as cheap as possible. They would appreciate receiving any help to improve the performance – maybe improving their code or utilising all the four cores more efficiently. For the bigger wheelchair, they used recycled car windshield wiper motors and some relays to switch them. They also used a 3D printer to print an enclosure for the camera and wheels to help turn the wheelchair. Further details are also available on [Myrijam]’s blog. They documented their build (German, pdf) and have their sights set on the German National Science Fair. The team is working on English translation of the documentation and will release all design files and source code under a CC by NC license soon. 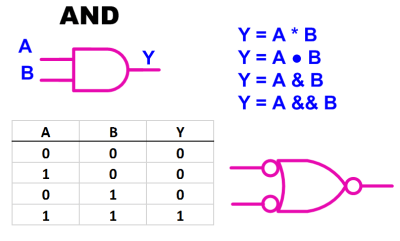 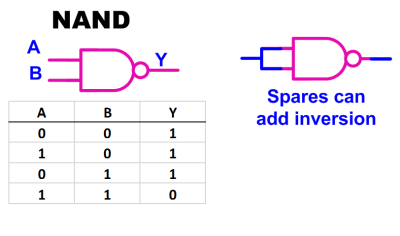 END_OF_DOCUMENT_TOKEN_TO_BE_REPLACED

If you’ve ever been to a capture the flag hacking competition (CTF), you’ve probably seen some steganography challenges. Steganography is the art of concealing data in plain sight. Tools including secret inks that are only visible under certain light have been used for this purpose in the past. A modern steganography challenge will typically require you to find a “flag” hidden within an image or file.

[Anfractuosus] came up with a method of hiding packets within a stream of network traffic. ‘Timeshifter’ encodes data as delays between packets. Depending on the length of the delay, each packet is interpreted as a one or zero.

To do this, a C program uses libnetfilter_queue to get access to packets. The user sets up a network rule using iptables, which forwards traffic to the Timeshifter program. This is then used to send and receive data.

All the code is provided, and it makes for a good example if you’ve ever wanted to play around with low-level networking on Linux. If you’re interested in steganography, or CTFs in general, check out this great resource.