Creating your own PC board is a rite of passage for many. These days, though, you can order super inexpensive boards and have them in very little time, so it doesn’t always make sense to build your own. Still, some people like the challenge, and others don’t want to wait even a few days. Probably everyone has dreamed of a 3D printer-like machine that would just crank out beautiful PCBs. The Voltera V-One isn’t quite at that level of sophistication, but it isn’t too far from it. [Great Scott] shows us how he built two different boards using the system in the video below. While the results were impressive, you can also see that there are several limitations, especially if you are not designing your board with the machine in mind.

END_OF_DOCUMENT_TOKEN_TO_BE_REPLACED 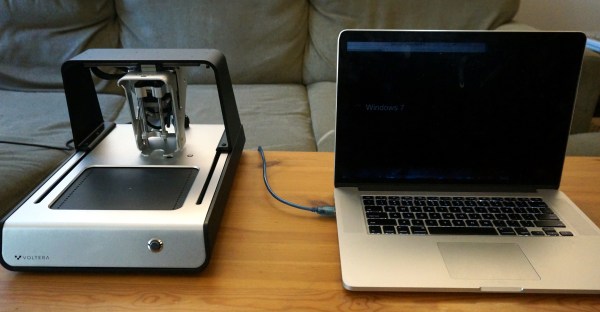 Back in Feburary, I was one of the first people to throw some cash at the Voltera V-One circuit board printer on Kickstarter. With an anticipated delivery date of Q4 2015, I sat back and waited. This week, my V-One arrived!

I’ll preface this article by pointing out that I do know the folks at Voltera as we went to university together. That being said, I did put down my own cash for the device, so I’ve bought the right to be critical. I also have no relationship with their company. In this article, we’ll go through unboxing and printing, then get into a review of the V-One based on what we’ve seen so far.

END_OF_DOCUMENT_TOKEN_TO_BE_REPLACED

It’s amazing how affordable PCB fabrication has become. It has long been economical (although not always simple) to fabricate your own singe and double-sided boards at home, the access to professional fabrication is becoming universal. The drive continues downward for both cost and turnaround time. But there is growing interest in the non-traditional.

Over the last year we’ve seen a huge push for conductive-ink-based PCB techniques. These target small-run prototyping and utilize metals (usually silver) suspended in fluid (think glue) to draw traces rather than etching the traces out of a single thin layer of copper. Our question: do you think conductive in will become a viable prototyping option?

I recorded this interview at 2015 CES but was asked not to publish it until their crowd funding campaign went live. If you haven’t been paying attention, Voltera is at almost 400% of their $70k goal with 26 days remaining. This printer definitely works. You can print circuits, solder components , and there’s even a second non-conductive ink that can be used to insulate between traces when they cross over one another. In the video [Alroy] suggests Voltera for small production runs of 10-20 boards. Would you see yourself using this for 10-20 boards?

Personally, I think I could solder point-to-point prototypes in less time. Consider this: the V-One will print your traces but you still must solder on the components yourself. If the board design reaches a high level of complexity, that timing may change, but how does the increased resistance of the ink compared to copper traces affect the viability of a board? I assume that something too complex to solder point-to-point would be delving into high-frequency communications (think parallel bus for LCD displays, etc.). Is my assumption correct? Do you think conductive ink will get to the point that this is both viable and desirable over etching your own prototypes and how long before we get there?

Now, I certainly do see some perfect use-cases for Voltera. For instance, introduction to circuit design classes. If you had one of these printers at the middle school or high school level it would jump-start interest in electronics engineering. Without the need for keeping chemical baths like Cuperic Chloride or Ferric Chloride on hand, you could walk students through simple board design and population, with the final product to take home with them. That’s a vision I can definitely get behind and one that I think will unlock the next generation of hardware hackers.

Correction: [Arachnidster] pointed out in the comments that Voltera is still working on being able to reflow boards printed by the V-One. On their Kickstarter page they mention: “(Reflow onto Voltera printed boards is currently under development)”

There are two printers being shown off at the 2015 Consumer Electronics shows which really spark our interest. They are the Voltera and the Voxel8. Each is taking on the challenge of printing circuits. They use similar techniques but approach the problem in very different ways.

[Michael Bell] poses with the Voxel8

Quad on the print bed of the Voxel8

The Voxel8 marries the idea of a 3D printer with a silver conductive ink dispenser. You start by modeling your entire design, hardware and electronics, all in one. The printer will then begin the 3D print, pausing when necessary for you to add electronics and mechanicals. With the parts — and their pins — in place it lays out the conductive ink to connect the components and then continues with the 3D printing to finish the object.

[Alroy Almeida] poses with the Voltera

PCB demo, colored traces are for insulation between layers

The Voltera is a PCB printer that uses silver conductive ink. It prints the ink onto a substrate. Pads made of the ink are used to solder the components in place after the printing is finished. The trick added to this design is the ability to print two layers, both on the same side of the board. There is a second ink material which is an insulator. It is laid over the first conductive layer before the second is printed, allowing traces to cross over each other.

Congratulations to the Voltera team who won $50k from the 2015 Hardware Battlefield at CES.

We didn’t see enough to shake our skepticism about the viability of silver conductive ink to take the place of copper on prototype boards. But if anyone is going to make the case that it is plausible these two offerings will.

One interesting thing about the Voxel8 is the ability to specify point-to-point wiring as a “part”. If you do so, the machine will pause while you solder the wires in place before it encapsulates them with the rest of the print. Of course if you’re going to do this manually it shouldn’t really matter which printer you use for it.

What do think about the future of conductive ink for prototyping? Lets us know in the comments. 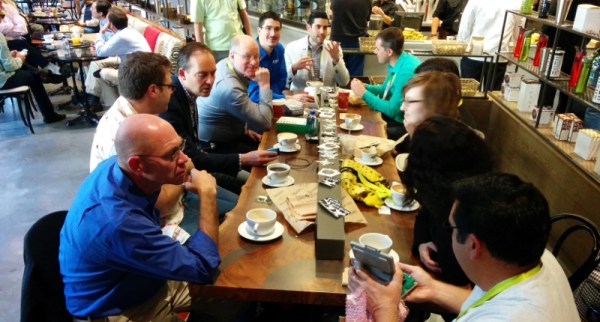 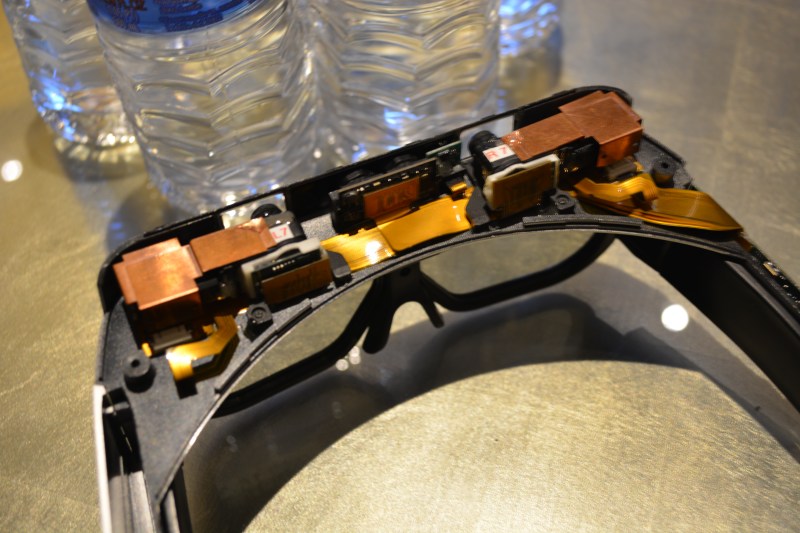 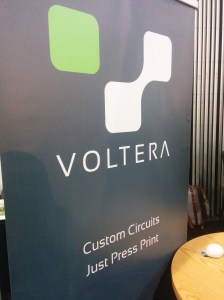