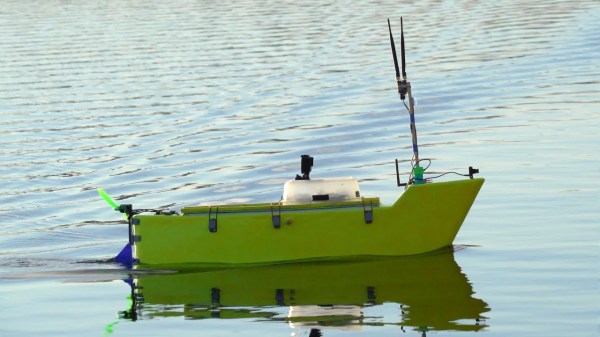 Thanks to the availability of cheap, powerful autopilot modules, building small autonomous vehicles is now well within the reach of the average maker. [rctestflight] has long been an enthusiast working in this space, and has been attempting long range autonomous missions on the lakes of Washington for some time now. His latest attempt proved to be a great success. (Video, embedded below.)

The build follows on from earlier attempts to do a 13 km mission with an airboat, itself chosen to avoid problems in early testing with seaweed becoming wrapped around propellers. For this attempt, [Daniel] chose to build a custom boat hull out of fiberglass, and combine both underwater propellers and a fan as well. The aim was to provide plenty of thrust, while also aiming for redundancy. As a bonus, the fan swivels with the boat’s rudder, helping provide greater turn authority.

After much tuning of the ArduPilot control system, the aptly-named SS Banana Slug was ready for its long range mission. Despite some early concerns about low battery voltages due to the cold, the boat completed its long 13 km haul across the lake for a total mission length of over three hours. Later efficiency calculations suggests that the boat’s onboard batteries could potentially handle missions over 100 km before running out.

It goes to show that, even with an off-the-shelf autopilot and mapping solution, there’s still a huge amount of engineering that goes into any successful long-range mission, whether land, sea or air.

END_OF_DOCUMENT_TOKEN_TO_BE_REPLACED

We’re not even halfway through January, and already the conference season is upon us. This weekend, Hackaday will be attending Shmoocon at the Hilton in Washington, DC. I’ll be there getting the full report on Russian hackers, reverse engineering, and what the beltway looks like with an ice storm during morning rush hour.

What’s in store for Shmoocon attendees? The schedule looks really cool with talks on something like inline assembly in Python, tools for RF reverse engineering, manufacturing and selling a U2F token, emulating ARM firmware, and so much more. Want to attend Shmoocon? Too bad! Tickets sold out in less than 10 seconds, and we’re totally not going to talk about the BOTS Act at all. If you’re clever you can still pick up a barcode on Craigslist for $300-400, but I wouldn’t recommend that.

As we did last year, Hackaday is going to have a lobbycon with Dunkin Saturday morning at 08:30, although which lobby is still up in the air. Check out the Hackaday Twitter for a few real-time updates. This is a bring-a-hack event, and I’ll be showing off how to add 18dBi of gain to a standard ESP8266 module. Show off what you’re working on and get a donut.

HacDC, Washington DC’s own hackerspace has been kind enough to open their doors (and floors) to fellow hackers planning on visiting DC this weekend for the upcoming Rally to Restore Sanity. They are taking registrations now, and space is limited, so act fast. They have a suggested donation of $20 a night, which will get you floor space and breakfast each morning, as well as the warm feeling of supporting a community based Hackerspace. Details can be found on their registration page, and please make sure you read the rules before registering. Thanks again to HacDC for supporting the Hacker community!

In other news, Hack a Day will be at the Rally, so keep an eye out for the writers wearing the Hack a Day shirts, as well as the HackaDay Twitter. If you get seen with one of us, you might just make it to the fan gallery. We will also be handing out some HackaDay Swag if you catch us soon enough on Saturday.