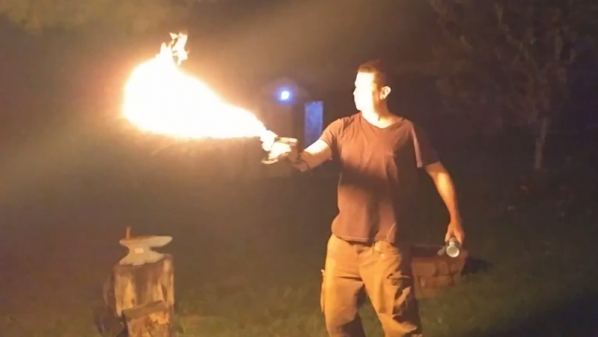 We’ll say it just once, and right up front: wrist-mounted flamethrowers are a bad idea. An itchy nose and a brief moment of forgetfulness while sporting one of these would make for a Really Bad Day. That said, this flaming gauntlet of doom looks like a lot of fun.

We’ve got to hand it to [Steve Hernandez] – he put a lot of work into the Flame-O-Tron 9000. Building on his prior art in the field, [Steve] went a bit further with this design. The principle is the same – butane plus spark equals fun – but the guts of this flamethrower are entirely new. A custom fuel tank is used rather than the stock butane can, and a solenoid valve controls fuel flow. Everything lives in a snazzy acrylic case that rides on a handmade leather bracer, and controls in the hand grip plus an Arduino allow the user to fire short bursts of flame or charge up for a real fireball. See what you think of the final product in the short video after the break; it sounds as though even if the fuel runs out, the high-voltage would make a dandy stun gun.

Maybe we should lay off the safety nagging on these wrist rockets. After all, we’ve seen many, many, many of them, with nary a report of injury.

END_OF_DOCUMENT_TOKEN_TO_BE_REPLACED

There are three types of booths at Maker Faire. The first is the strange corporate booth, like Pepsi ‘revolutionizing fluid intake’ or some such nonsense. That one had the longest line of any booth, in case you’re wondering. The second type of booth is the people you would expect to be there – Atmel, TI, and Makerbot all came out in full force.

The third type of booth were a little hard to find. They’re the ‘show and tell’ spirit of Maker Faire, and [Stephen Hawes] was one of the best. Why? Wrist-mounted flamethrower, that’s why.

The flamethrower is fueled with a propane bottle originally meant for a camping stove, with a microcontroller and pot setup taking care of the height of the flame. Buttons underneath [Stephen]’s thumb takes care of the propane flow and -based ignitor. The wrist measurement sensor can rescale to adjust the height of the flame to how far the wearer can move their wrist.

All in all, a great project for the Faire, although we did feel a little sorry for the NYC fire marshal that was assigned to [Stephen] for the entire faire. As an aside, we’re applauding [Stephen] for not referencing whatever comic book character has fire shooting out of his hand.