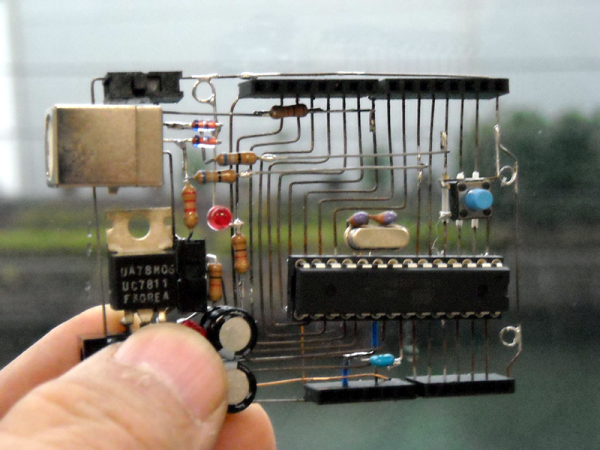 [Kimio Kosaka] is taking the concept of free-formed circuits to the next level with O’Baka Project No.7. It’s a fully functioning Arduino board, without the board. The traces are there and provide all of the support for the rest of the hardware. You can imagine the fragility of the package so it won’t be a surprise to learn that O’Baka Project means ‘stupid’ project.

We don’t think this manufacturing process is completely worthless. The ‘board’ seen above looks quite interesting and might be a good idea when building a show-piece where you want the circuitry to be seen. [Kimio] describes the process he used to achieve this look. The first step is to design a single-sided circuit board; he used EagleCAD. After printing out the traces he used 0.46mm steel wire to trace out each connection. Now heat up that soldering iron – [Kimio] recommends using high-acid flux to ease the process of soldering to the steel.

We think this would nicely compliment projects like LED cubes that use the circuit itself as a support structure. See this Arduino alternative from several different angles in the video after the break.

END_OF_DOCUMENT_TOKEN_TO_BE_REPLACED Carnival in Salvador, Brazil is arguably one of the biggest and craziest parties this world has ever known.  With millions in attendance for what is already an incredible audio and visual display, performers are faced with the daunting task of continually bringing something new and fresh to the masses. One could always add more fireworks or visual displays (never a bad thing), but it will only take you so far. [Kyle McDonald] and [Lucas Werthein]’s answer: The ElectroAxé Full-Body Percussion Suit as demonstrated by Carlinhos Brown at Carnival 2011.

When most people hear the word “axe” as related to music they think of an electric guitar. “Axé” however, refers to a unique Afro-Caribbean fusion genre of music that originated in Salvador in the mid 1980’s and is a favorite at Carnival. [Carlinhos Brown] is a popular Brazilian percussionist and was looking for a creative new way to express himself through his song and dance. Instead of being stuck in one place near his instruments or carrying one or two drums around “marching-band style”, he is now able to move around the stage freely – his body has become his instrument.

In order to make the magic happen, [Kyle] and [Lucas] designed custom laser cut and cnc machined drum pads containing piezo sensors and integrated them with a full-body jump suit. When struck, these sensors send a signal to an Arduino with a Sparkfun Midi Shield housed in a custom enclosure on the performer’s waist. From there the MIDI signal is sent wirelessly and then audio is played through the existing sound system – it appears that a CMD WIDI X-8 wireless MIDI system is employed for the actual wireless transmission.

Although details are somewhat scarce, there are plenty of pictures, (more) available.  You really can’t argue with the results as you watch thousands of people jam along.

Come join in the festivities with video after the break!

END_OF_DOCUMENT_TOKEN_TO_BE_REPLACED